Front end coming together and the need to think things through.

One of the great things with this hobby is that you always have something to think about. When you are working on a project there´s always that strange thing happening, that missing piece you need to get or you need to figure out how stuff is supposed to work. From time to time you end up wondering why they chose to solve a problem the way they did. Working on one of these old racers is in no way different. It is very clear the guys building these had problems here and there and had to solve them on the go, quickly and at a low cost.

40+ years later, trying to restore them we face even more problems. Racers have been using them for a few years, trashing everything over and over again. When the bikes became obsolete for the good racers they trickled down to the slower guys with less resources and were repaired accordingly. Parts were quickly getting scarce and it became harder and harder keeping them on the track. Finally they ended up in someone´s attic, garage or, as in my case, a barn. 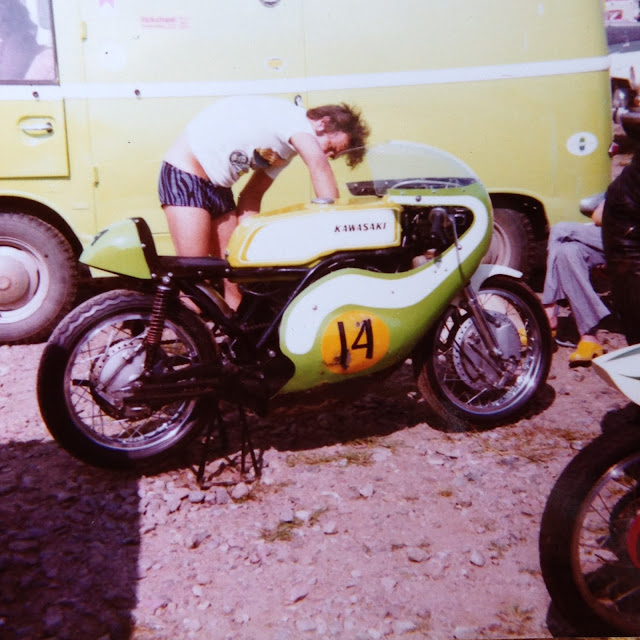 Here´s the one and only picture I have of Björn and the bike. I think this is in 1973, close to when he stopped racing it. You can see the bike looks almost exactly the way it did when found in the barn 42 years later.
Here we can also see the fairing is the same and has the same paint as when later found. The Girling shocks are there, the slight mismatch between paint on the tank and the fairing and the number "14" visible on the rear seat. That number (or at least their outline) is clearly visible also on the pics from the barn... Things are a bit more shiny and polished here, though.


OK, Back to 2017... The last few days I completed the front fork stanchions and yesterday it was time to try and get them on to the bike. When you have restored things and try getting them together again there´s always new problems showing up. Paint goes everywhere and makes parts ever so slightly larger. Zink is a very thin electrolytic layer on bolts, screw, nuts and axles, but you need to clean the threads anyway. I use taps and dies to clean threads everywhere before installing anything on the bike. Lubrication of threads and screws are also important, especially when using a torque wrench. 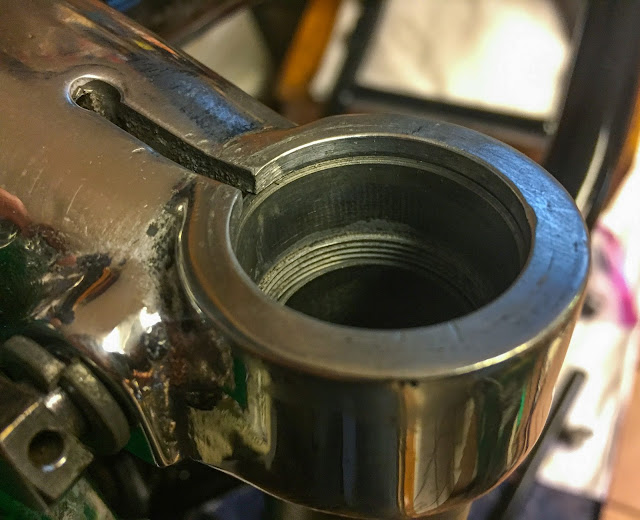 After cleaning up the lower triple tree, threads and stanchion clamps from paint, I could get the tube all the way up in to the top yoke. Nice fit! The large top nut will torque the stanchion up towards the tp yoke and hold it in place. 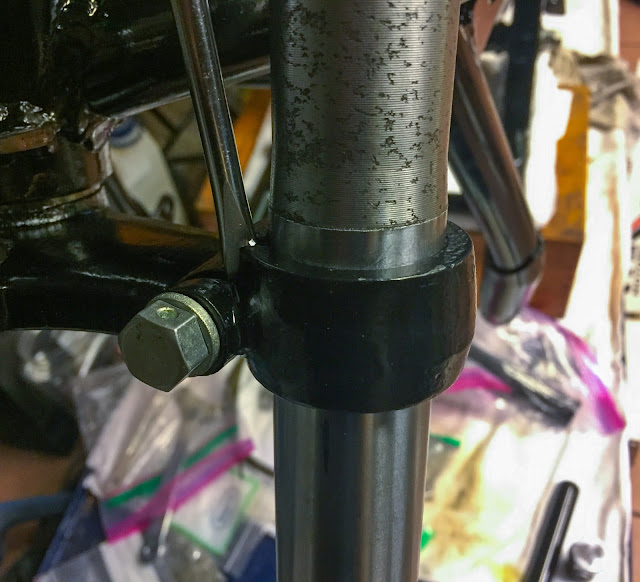 I had to use a screw driver to widen the clamp a bit to fit the tubes. Here it is also very clear I´m using the old, original tubes. The pitting is still there on the untreated, milled down, surface between the triple trees. I like it. If I ever change my mind, I have the fresh copies, remember?! 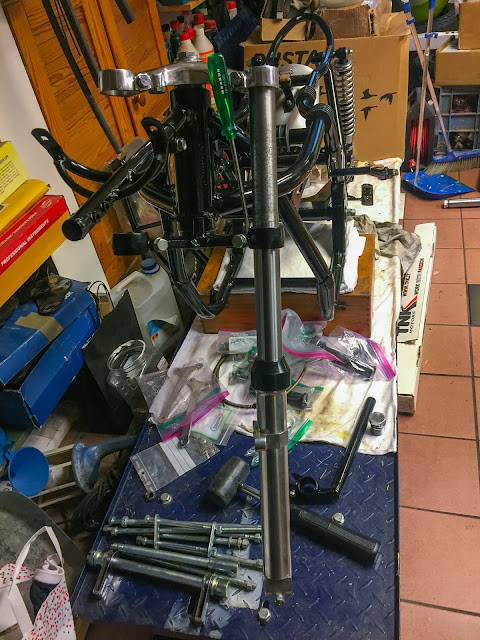 It is nice to see that it is possible to get it back together. Before tightening it all up I need to fill the tube with fork oil and also get the handlebars on. The screwdriver remains in place while I fettle with that. 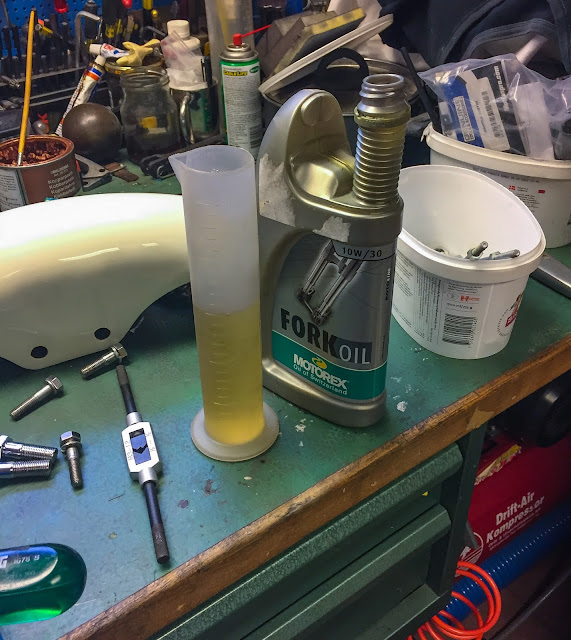 According to the manual, 150cc of oil goes in each leg. I decided to use a modern type of front fork oil instead of the mixture between spindle oil and Mobil oil prescribed in the book. 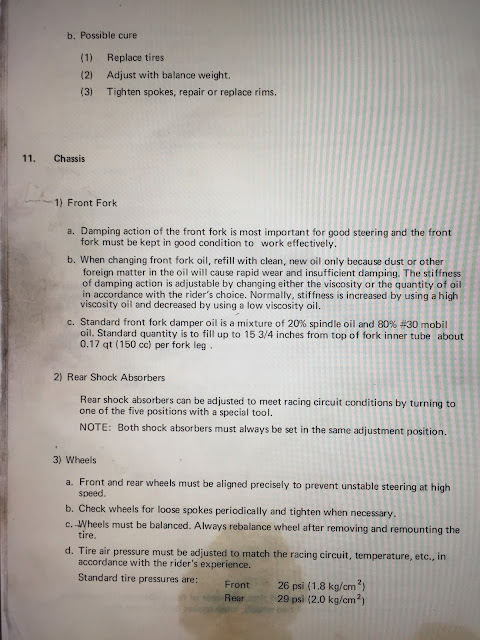 Here´s the text in the manual. 20% spindle oil and 80% Mobil #30. Adjusting of the damping is made by using different viscosity of the oil, just as on any other front fork. I think it is interesting to se how basic these instructions are. Both rear shocks have to be set at the same level... Oh, is that so! 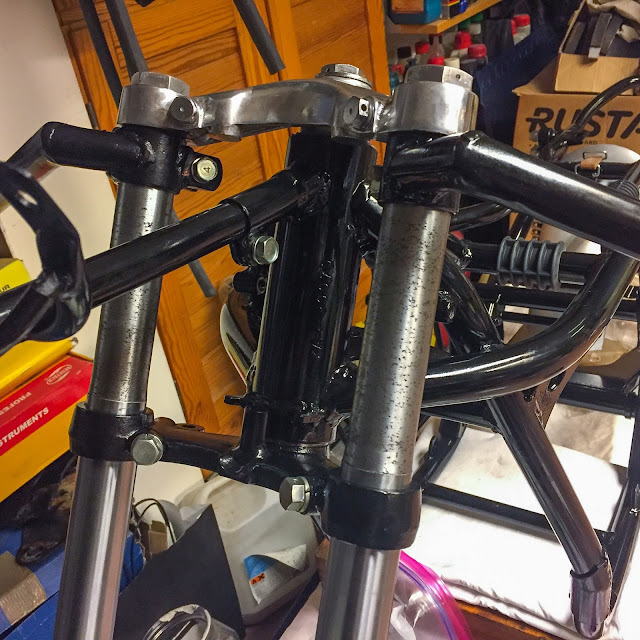 It took a couple of hours getting everything in place, front fork legs filled with the prescribed amount of fluid, the handlebars cleaned and in place with the correct screws on to the stanchions, but here we are! All nuts and bolts tightened and waiting to be safe-tied. I´ll do that when everything is done and the bike is ready to start. Experience tells me
I´m going to take it all apart at least a couple of times before I get it all right! The very same crews are used at the exact same place. Just restored and re-zinked. 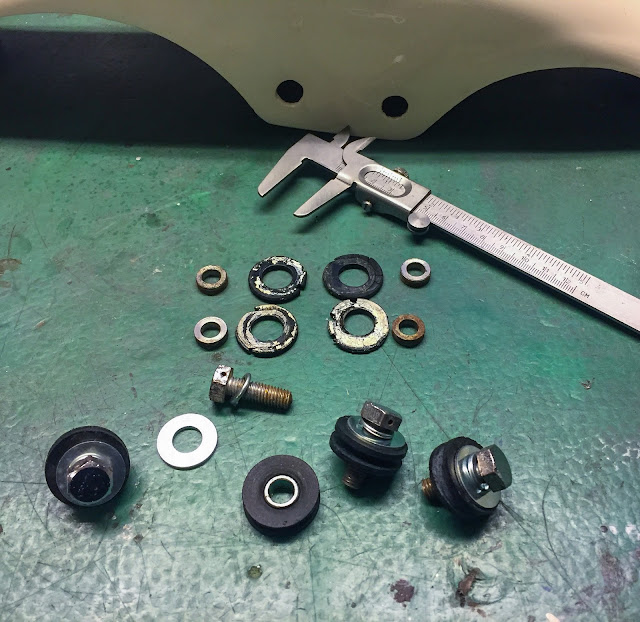 Let´s move on to the front fender. The original hardware doesn´t look that impressive. 4 rubber washers, 4 8mm screws, 4 collars and some missing plain washers etc. Here´s one of the thinking moments. Do I use the old, battered stuff or find something better? Closest in the picture are the original screws and 4 side cover grommets from an H1 1973-75. I don´t like the way the fender was mounted from the factory so I´m considering an upgrade. One rubber washer, a collar and a plain steel washer on the inside won´t make the fender rubber mounted. My side cover grommets will! Can I get them in there without making the holes bigger? 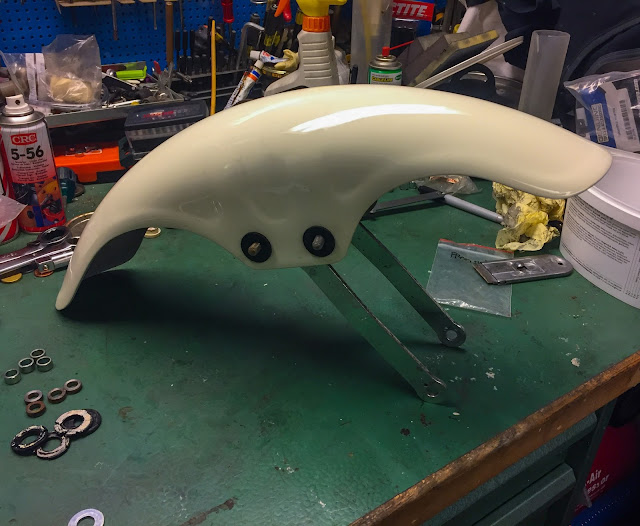 Sure thing! They fit, tight as h*ll, but I can at least try it out on the front fork to check clearance with the front wheel. It´s a bugger fitting too large screws and finding out the wheel won´t clear the screw heads... 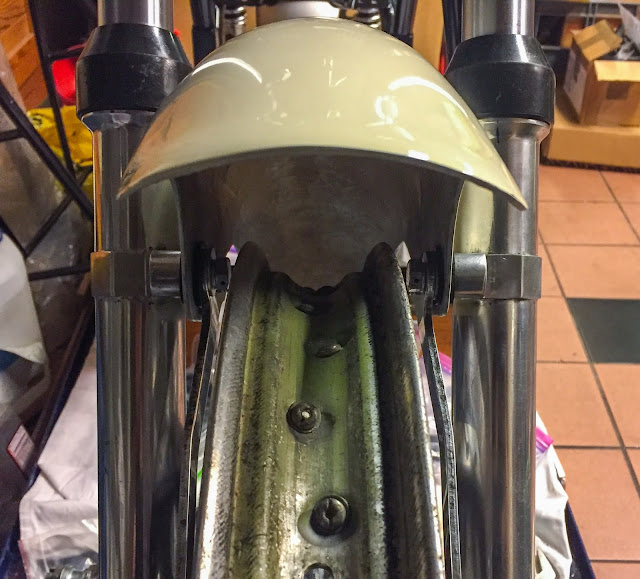 The first mock-up of the "might-come-to-be" fender mounting upgrade. Looks OK! The screw heads clear the rim by at least a few millimeters on each side. 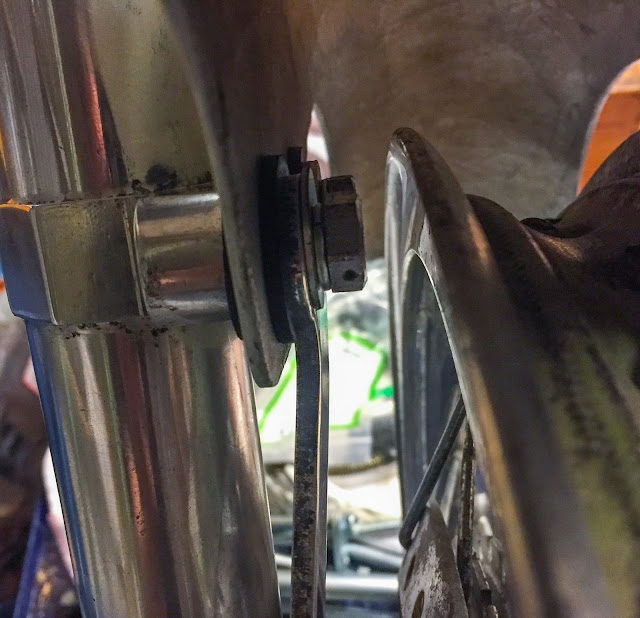 That is good enough for me! It
won´t be possible to change the fender without removing the front wheel, but I can live with that.
That´s usually not possible on any triple as far as I can remember. 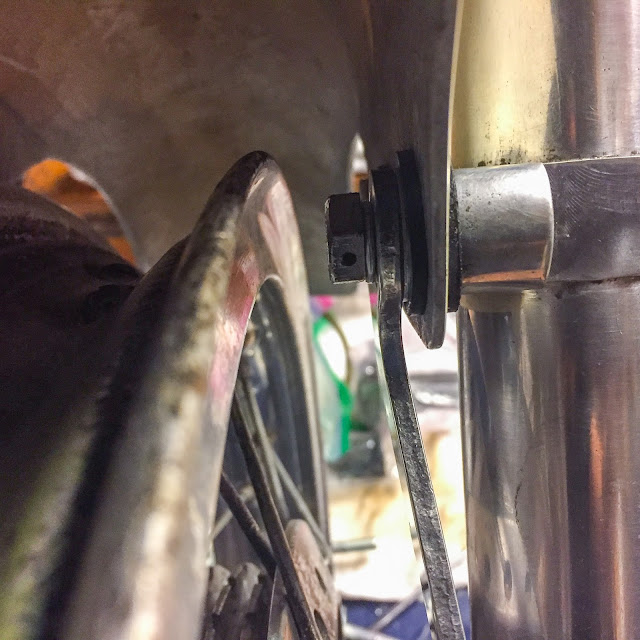 And the other side. Wheel centered, without brake panels or spacers. 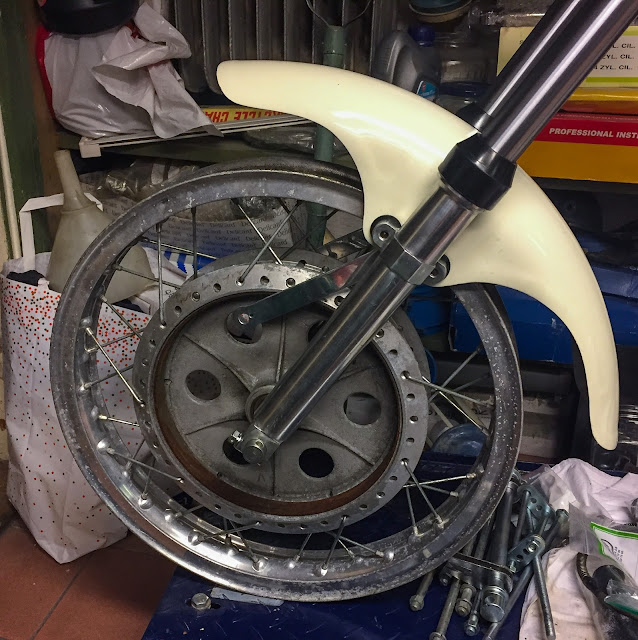 And here´s what it looks like from the side. I later noticed (from older pictures) that the fender goes on the other way around. The longer part actually should face forward. Easy fis, since this was only a tryout for the mounting hardware. I´m going to leave it like this for a few days while I´m off on another job journey. 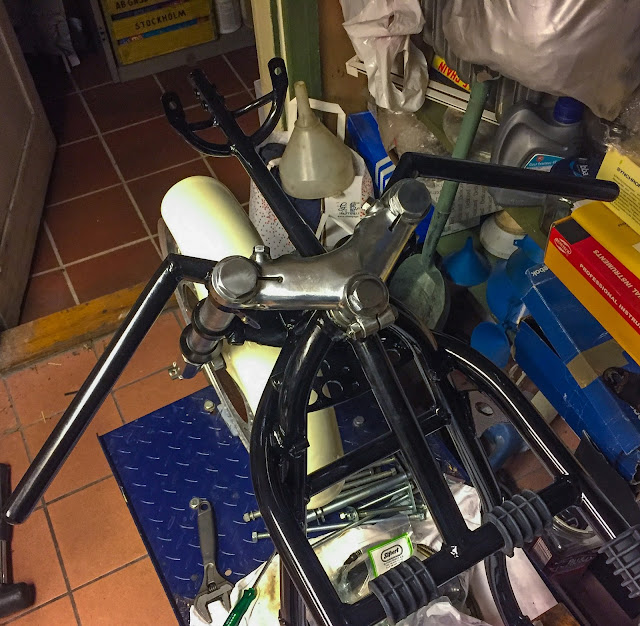 Top view of the front end as it sits today. The angle of the handlebars will probably have to be adjusted later, but this is what it looked like on the first pictures I have. Surprisingly wide bars when they come back on the bike. 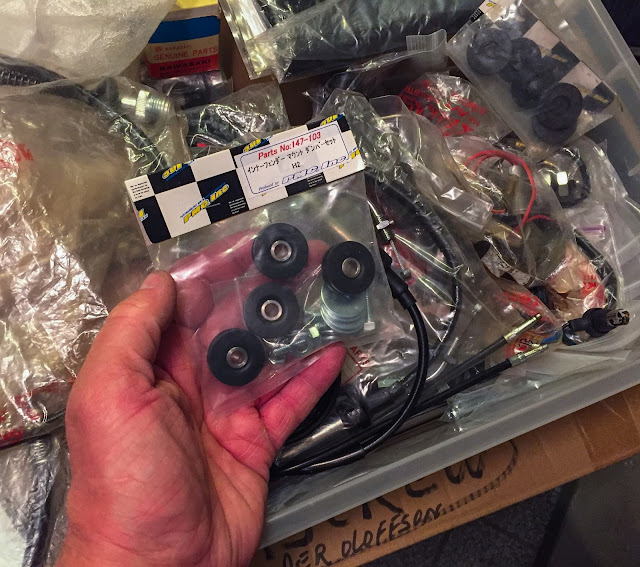 I came to think of another option for the mounting of the fender. The Kawasaki H2 750cc has some similar hardware for the rear fender. I looked through one of my boxes and sure enough, I had a set! Aftermarket from japan. PMC INC. makes lots of repro parts for the Kawasaki triples. And I think they are GOOD. Their left side cover for the H2, is absolutely superb. 100% correct with all reinforcements  and spot welds exactly like the stock product. 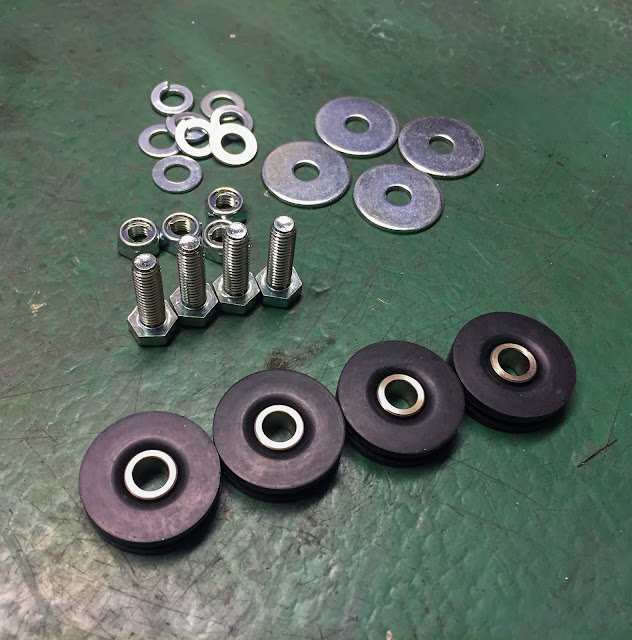 These rubbers and collars are much thinner and wouldn´t build as much as the side cover ones do... the problem here is the diameter of the screws are 6mm. There you go! Something to think about the coming days while flying to Chicago and back. 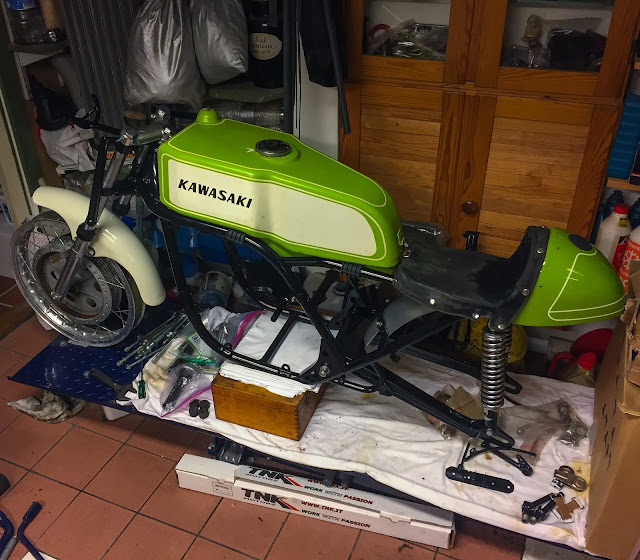 OK, time to stash it all up again preparing to get the two daily riders back into the garage. It is always nice to take a picture of the bike showing the grade of assembly done so far! I´m getting there... 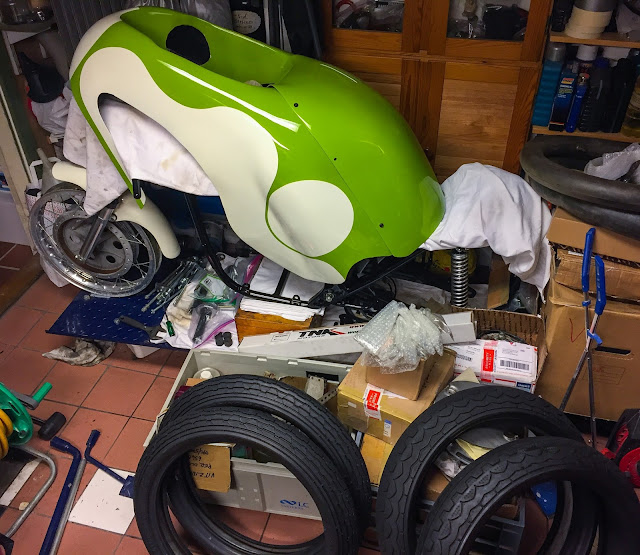 This is what the project looks like when I´m not working on it. I have to store it all in the same place where I work on it... I wish I had a larger workshop, but space is a scarce commodity here in Stockholm, these days. 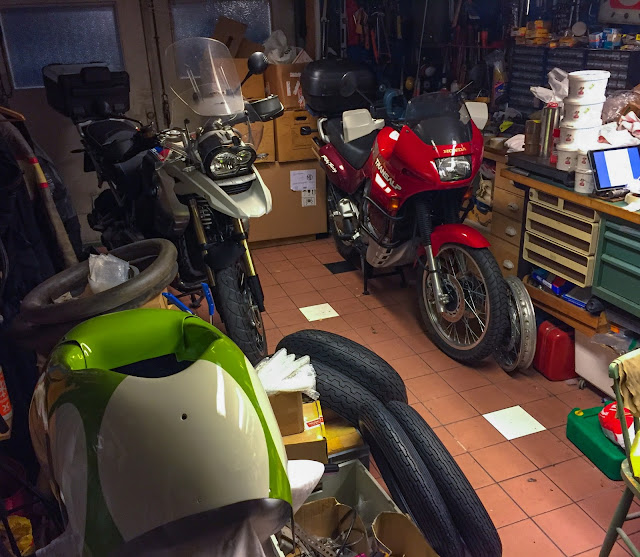 And here the bikes are back inside... A bit crowded, but nice. 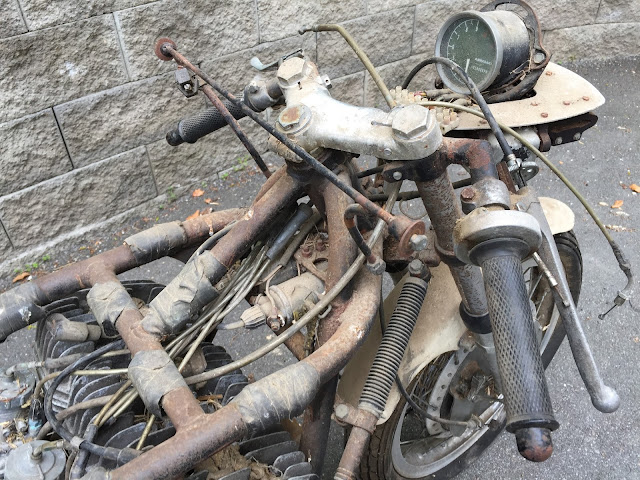 I thought I would add a "before-picture" just to remind you what it looked like when I started out 16 months ago...

So, I´m off working for a while. Catch you soon!