Front fork stanchions and the need to get a second opinion.

Summer is moving a long here in Sweden. We passed midsummer last weekend and now we look forward to days getting shorter again... That means the motorcycle season is in full swing and we all try to get as many miles on two wheels as possible during the short and intense summer months.

In between the bike rides there´s also time to fettle a bit with bike restorations. A few things has evolved since last time. 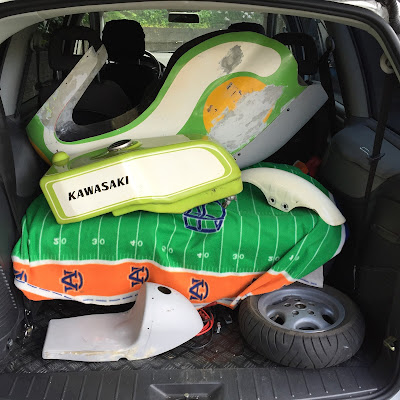 My body kit went out to Janne a couple of weeks ago and he´s going to take his and mine to Johnny´s Mc-lack in the near future. If he´s not already done so.  The rear wheel is for a friend who´s Vespa had a flat tire. Brought it along since I was driving around town anyway. 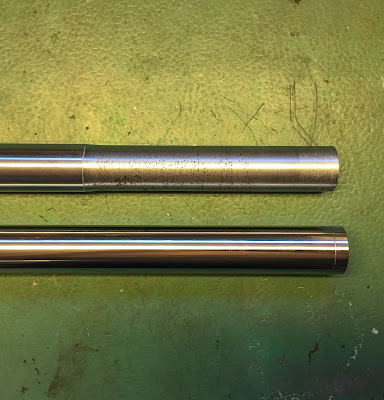 About a week ago my stanchions were ready at the grinders! What a job they did! superb workmanship and excellent service. It took a while, but it was well worth the wait, and the very humane pricing. The sliding surfaces are perfect and also perfect in measurement. 5 to 6 hundreds of a millimeter of clearance to the inner surface of the outer leg. Should be just fine. Here you can see the top part of the original tube and the new ones I bought from Italy. They are from a Yamaha RD250 1973-75 and seem to be exactly the same on the inside but a tad long and also not milled off at the top like the stock ones are. 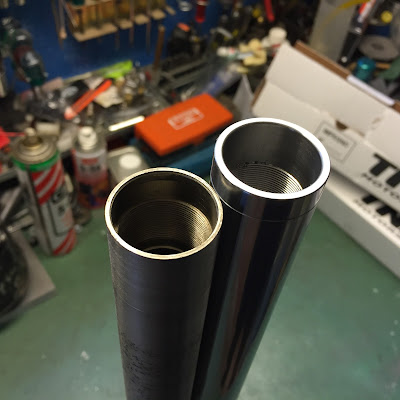 Here´s the top view of the legs. You can imagine the threads are at the approximate same height from the bench, the repro tube is just longer above the threads. That suits me just fine! 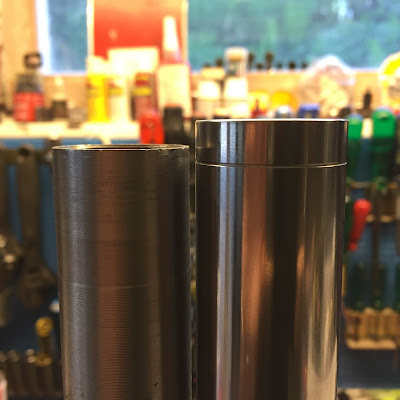 They need to be cut about 6 mm or so. And reduced to 32mm at the top triple tree as well. 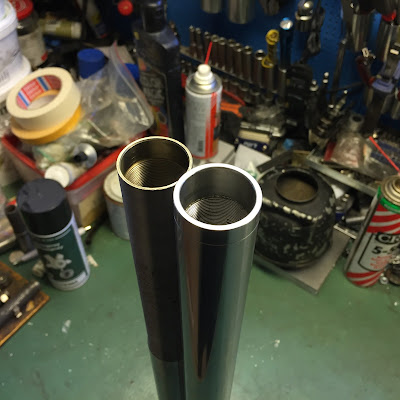 The difference in thickness of the tubes is clearly visible here. I imagine they saved some weight by reducing the stanchions diameter, but they must have lost some strenght in the process?

So, now it was time to find someone who could mill my tubes to specifications... Janne have an old friend with a mill but he wasn´t sure about it.

- "Naa, you need a CNC-mill to that properly, and I don´t have one". "Talk to the guys at XXXXXXX AB, they do jobs for Janne and many others in the motorcycle community"

OK, a trip to that business a bit south of Stockholm and a friendly discussion about what needed to be done, when they would be able to do it and at what cost. I´m not that sensitive when it comes to paying for stuff and said I could pay up to 600 USdollars to get it done. The total cost to restore my stock stanchions reached over 800 bucks... I figured that would be OK. They needed a week to look at the job and we agreed I could go there and pick up my stock pipe after a week and we would discuss further about the job.

I had a nagging feeling on the way home.... I need a second opinion on this matter! I called the guys in "Konturverktyg AB" in Kungens kurva just south of town. That´s where I went to try and copy the stanchions earlier, remember?

- " The best guy we have is on vacation right now, but he can have a look at it next week"

Perfect! One week later I went back to the first company and picked up my stuff. They wouldn´t be able to do anything before August anyway and it was a bit complicated to mill in such hard surfaces and what not...

I went to Kungens kurva and to Belim and the guys at Konturverktyg instead and were told they would have look at it and let me know within a week. Fair enough.

The day after, THE DAY AFTER, Belim wrote me a text: "Your legs are done, Drago did them this morning"

WOW! One day, a fraction of the price and a super job done! I´ll take all my problems in the future to these guys, that is for sure. I ended up having my stanchions ready two months earlier and paid less than a third of what I was prepared to pay the others.

To be fair, they never got a chance to actually do the job, and I don´t know what their final price would be. But I´m a happy camper! 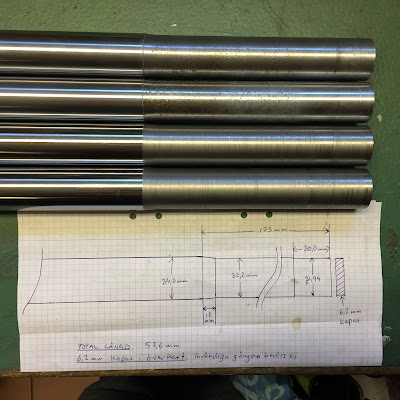 As you can see here Drago did an excellent job milling the hard chrome away and cutting of the 6 millimeters at the top. My measurement ´s and drawings can also be seen here.


The picture above shows what you need to do to adapt a front fork stanchion from Yamaha RD250 1973-75 to fit the Kawasaki H1R... Not too bad! 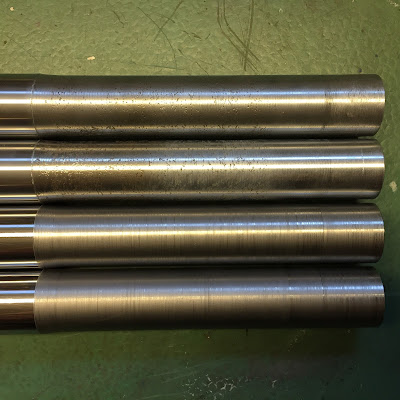 My old tubes (the originals) on top and the two copies below. I think the surface looks great, just like the stock ones. No surface treatment, no paint, no chrome, no nothing!
The problem will be choosing which ones to put on the bike....?? 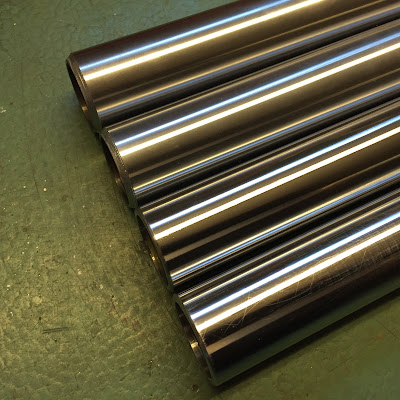 The bottom ends look a bit different but I don´t think that will matter at all. I tried to push the repro tubes fully into the outer leg and there was no sticking what so ever. They came right up without any problems. That chamfering at the bottom isn´t necessary. It actually poses a risk to mill down the hard chrome surface at that point. Belim didn´t recommend it.... 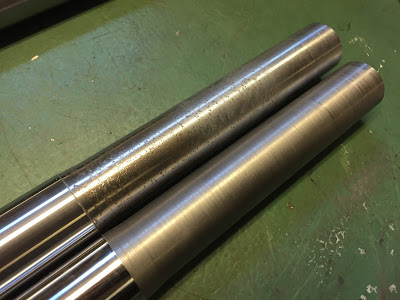 The difference in surface finish is quite obvious here. If I were to build a bike as new I would use the new ones, but I´m trying to keep true to my concept of a bike that has been used for a few races. For now I´ll go with the stock ones. They are also "Kawasaki" parts, don´t forget. 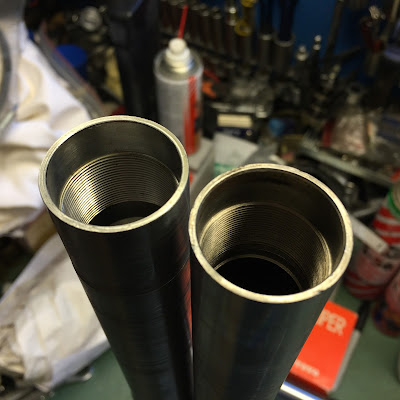 Look at the tops! Now you can´t really tell which one is stock and which one is a copy....!!
This process is finished and I´m very, very pleased with the result. 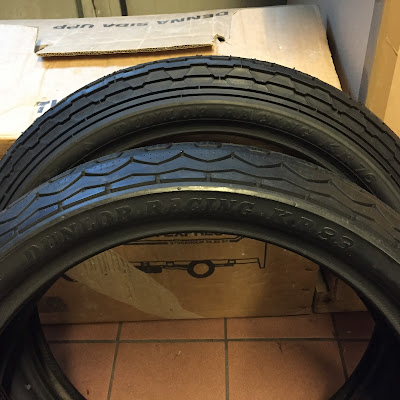 As I have mentioned before, you find new friends all over the place with a unique project like this.
Jean Francois Balde in France is one of them. My friend Francis Taillefumier knew Jean Francois and got us in contact. Jean francois sold me these brand new racing tires. THANKS A LOT!!  Exactly the same type I had on the bike. He will also try and restore my old tires! He has a method where old, hard rubber can be softened and be as new again. I´m SO excited to see if this really works... 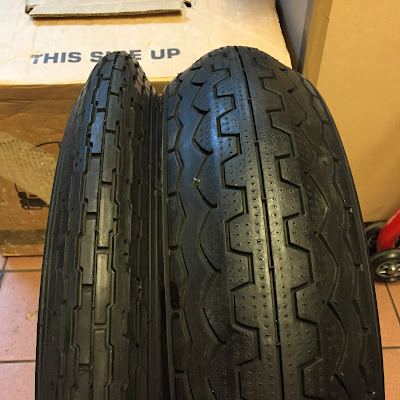 Doesn´t that look great! Brand new tires for my H1R... Now I need to get cracking with the wheels! I have tried polishing a bit here and there, but it is so tedious work...

I´ll end this post with a picture of my nearest future with the project. Wheel cleaning and polishing... I´m not done yet, not even close. There´s a whole lot of work to be done on these. I try hard not to take them all apart and repaint and rezink everything to as new condition, but I must refrain from doing that! I need to be able to keep that patina at least on the wheels.... Please help me!

Now I´m off for vacation for a couple of weeks and that means no work on the racer for a while. Bare with me, next time I´ll probably have more information on the wheels or maybe I´ve started to put the frame together and mount the front fork or so...

Keep cool out there in the heat!

Another thing I must mention is the new policy of  Photobucket... This is (or used to be...) a "free" picture service I´ve been using for more than 10 years. All my blog pictures, forum pictures and other places i use pictures in posts and links have gone completely bananas! If I want to keep using my so called "3rd party links" I had to upgrade to their biggest, most expensive plan... 400 Dollars a year!! That sucks so intensely I am having problems typing straight...!! I see it as a RANSOM to be paid to get your links back. The alternative is to sit down and edit ALL posts from the last 10 years and link them from another site where you first have to move all your images. I paid up. But I´m still mad as H**L!!