This is a short post about searching and finding stuff for your restoration project. I am constantly looking for parts for my bikes. Always. Most of the time I end up finding nothing, but from time to time I strike gold!

One of the parts on the H1R  I felt I needed to adress was the oil tank. It was on the bike, or rather, in one of the boxes included in the sale. It had seen better days, but it was there!

I started to clean it up a few months ago and figured it will have to use it as it is, unless i could find a better one. This is what it looked like back then. Wrong filler cap and pretty dirty and beat up in general.

Janne didn´t have any tank at all on his bike and had been searching for one for over 3 years. Not an easy part to find! Janne is, however, one of the "guru´s", when it comes to parts and part numbers etc. He actually bought Floeter´s inventory of parts when Floeter closed his dealership. Janne suspected these tanks were used on other applications from Kawasaki. He just didn´t know exactly for what, but suspected, some smaller, stationary engines used in generators, compressors and such. Kawasaki heavy industries made lots of things! Trains, excavators, airplanes etc, etc.  A while ago he found a very nice oil tank from an H1R including the bracket in The Netherlands. Real nice find!

I had the batterybox copied by Tommy Andersson at Proswede and he was also looking in to copying the oil tank bracket. A bit more difficult part to replicate and thanks to Janne´s find we never had to spend that money.

Anyway... The thought of these tanks being out there somewhere never left my mind and I kept looking and googling. And one day something showed up!

In Sweden we have an auction site, similar to ebay, called Tradera.It is actually owned by eBay today. I look there every now and then and search for everything related to kawasaki. This picture had been lurking for a couple of days when I looked at the auction. I never realized what I would find! 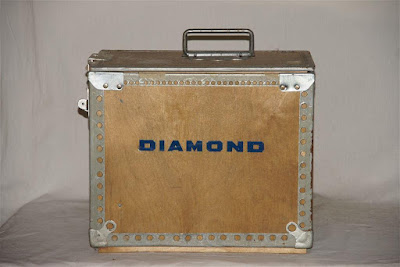 The listing talked about a "Motor Kawasaki Diamond flashlight" Well, what´s that? So, I looked at it and saw the other pictures in the listing.... WOW! 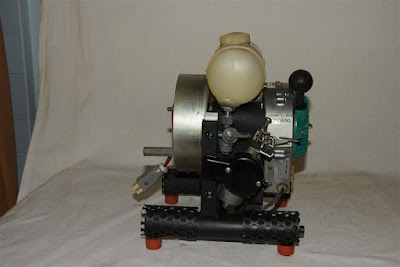 Look at that fuel tank!! Could it be?
To go further and learn more I enlarged the picture and saw the nameplate of the engine. KT12. OK, what´s that?

A small 2 cycle air cooled engine used to drive smaller appliances and generators just like this one! 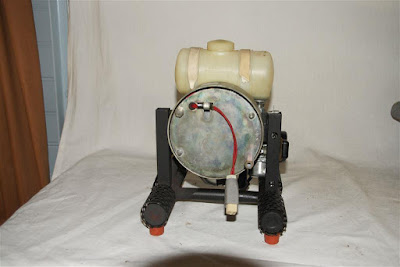 Well, it sure looks like it, right? Now a feverish wait took place for several agonizing days before the auction ended. There were more bidders, but I got it! At just over 80 bucks, US, it was a steal.... 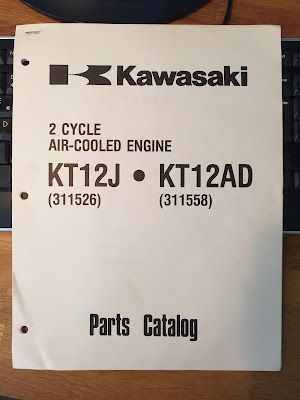 The hunt was on for more information concerning these engines and their parts! On eBay, USA, I found and bought this one.

- The parts manual for the little KT12 engine! Another steal at 13 bucks. 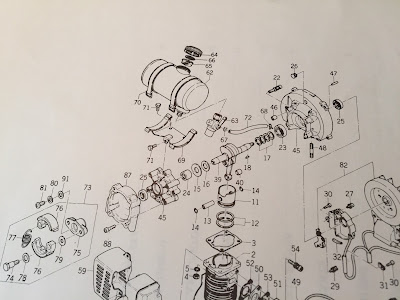 And here we can see the little gem! Completely different part numbers compared to the H1R parts manual, but the same parts, more or less...

Here it is, safely on the bench in my garage. Let´s have a closer look!

Isn´t that a sight for sore eyes? Pristine condition compared to my old one in the background. I still think it cleaned up alright don´t you think?

A side-by-side comparison reveals the truth. Exactly the same plastic mold used on both tanks. The metal fittings differ slightly due to their different applications. the fuel tank has a straight-down type of outlet and the oil tank has an angled, brass, outlet. That will be easily fixed! Too bad the straps were shot on the new tank, but I have a similar pair in stock!

I had been working a while on cleaning up the old tank and was curious if the lettering on the two tanks were identical or not? Here´s the old one. 25:1 indicates some kind of mixture proportions to be used. I thought it was strange to have that on an oil tank....

The explanation is rather simple.... It is not an oil tank in the first place. It is a fuel tank! The guys building the H1R in Japan took a tank from the shelf and used it on the racers, hence the 25:1 lettering. It sure is nice seeing such a nice condition on the tank. It will not show that much when installed on the bike, but I know it looks good and that makes me happy!

The brackets are 80% identical as well. Only minor differences on the mounting holes. easy fix!

A closer look at the engine. Nice little thing! Might come in handy one day.... Too bad it lacks the fuel tank!!

I´ll just put it back in the wooden box and put it on the shelf... Or, if someone is interested, I´ll sell it for 75 bucks US plus shipping. It lacks the fuel tank, though.

Apart from that, nothing as happened on the H1R the last week. Still waiting for the front fork stanchions to be grinded to measurement. I´m planning to sit by the sewing mechine sometime soon to make a couple of replica seat covers. One for Janne, one for me and one for a friend in Canada, if he still has the patience to wait...

Oh yeah, almost forgot, the fasteners came back from rezink the other day.


Here you can see the majority of the bolts, screws, washers etc for the brakes and wheels on the H1R. They should be coming together in the coming days. The difference between the two tanks are also clearly visible here. The fuel petcock on the fuel tank and the angled brass outlet on the old oil tank.

All in all a quite nice week for the Kawasaki H1R restorer!

Stay tuned for the next part of the story....