Preparations for mounting the engine in the frame.

Since last time I have been busy at work and also trying to locate parts, getting parts fixed here and there and also fettling a bit by myself in the garage. The next big move on the project is getting the engine back in to the frame. I want the engine to be more or less completed and finished when I do that lifting. I know, it is lighter to lift it in without clutch and stator etc, but it is also a lot easier to work on the engine when it is out of the frame, on the bench. The motor has been sitting on the right side of my working area since coming back from Malmö last winter. 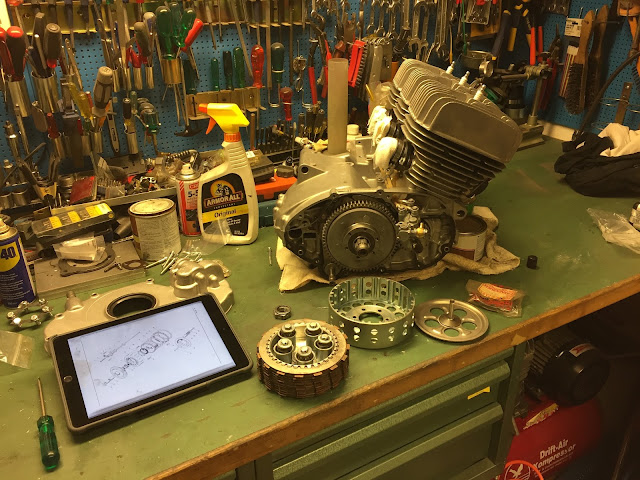 Nice and easy does it... Well rested mechanic (me), all parts needed present, the parts diagram on the iPad and here we go! When you are in no hurry, this is nice work. You have time to figure things out. How does it work? How did the Japanese engineers think? Good music on the radio and the hours tend to fly away quickly. 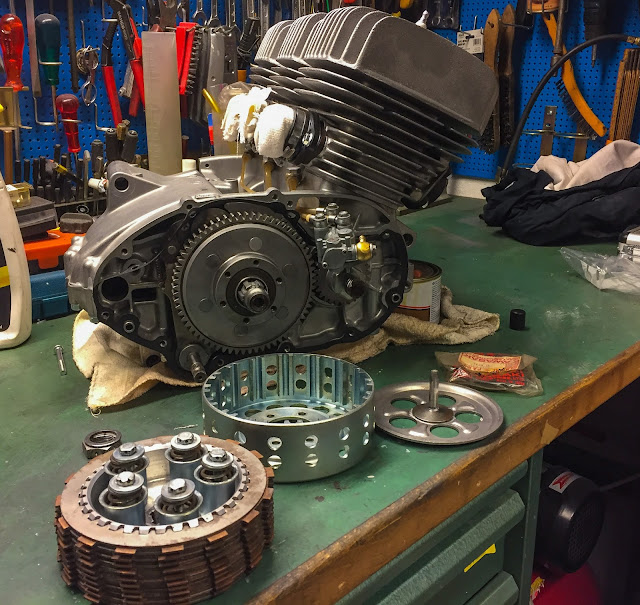 The only part that goes inside the clutch cover is the big primary drive. This sits on two needle bearings and has an internal oil seal that can be seen close to the shaft in the picture to the left. The parts really can sit only one way and that makes it easy to decide when you´re done. 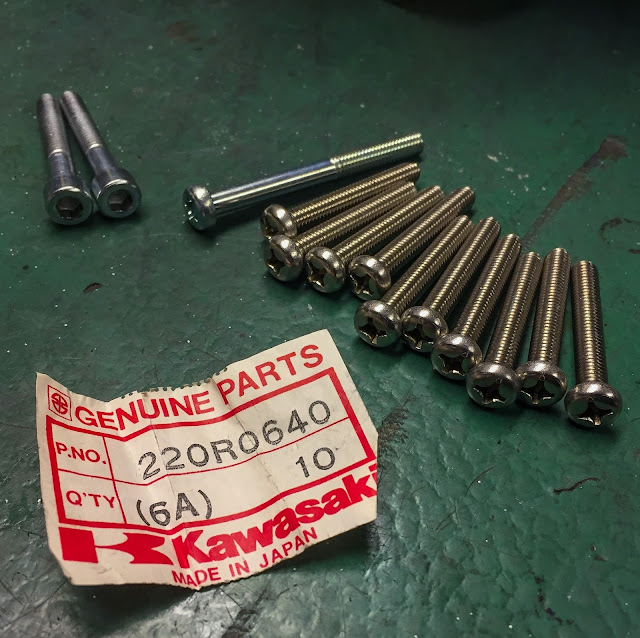 Next was the clutch cover. I had sourced new screws (NOS) for this job. I am no fan of Allen bolts at all and especially not on a seventies racer. 220R0640 is the part number for the shorter ones. 8 in all plus one longer. 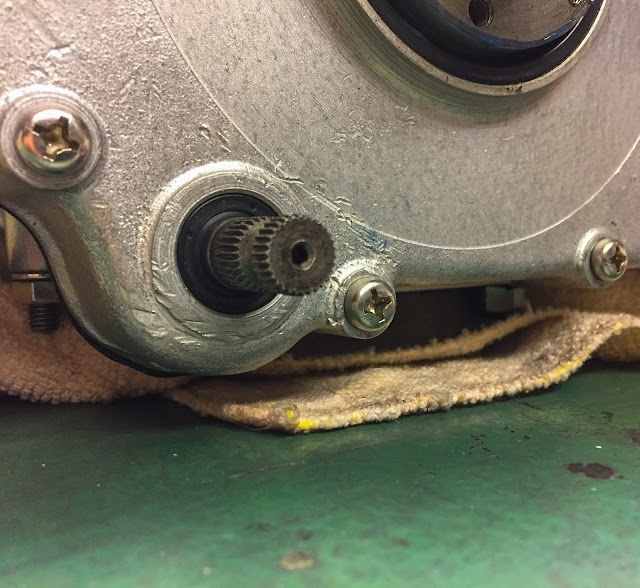 Now that I got the screws fastened on the cover I´m having doubts they are correct even though they came in an original parts bag with the correct part number... I believe Kawasaki have replaced the original hard-to-find pan head screws with a newer type. I may have to fix that later! 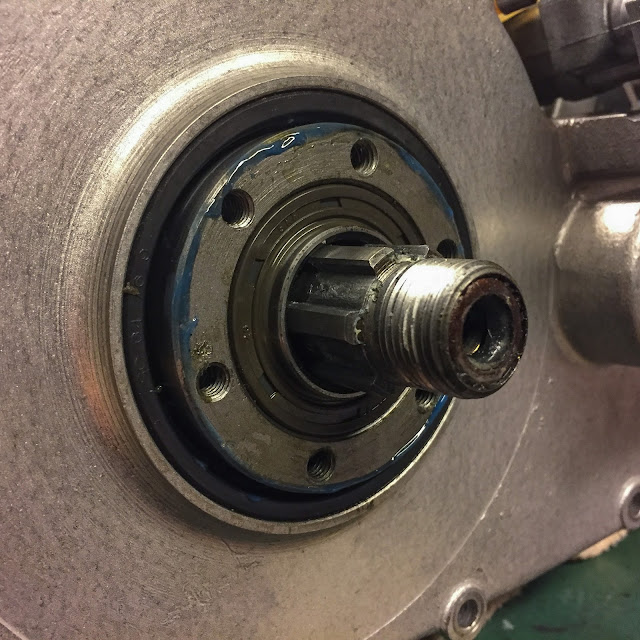 The large O-ring, sealing between the cover and the primary drive still felt fresh and soft. A little rubber grease on the lips of it and on the fresh sealing surface of the primary drive made it slide on quite easily. You can see the clutch push rod inside the axle. Interestingly there´s no "ball" in the H1R:s clutch mechanism. All the street bikes have them, but not here. Another one of the small mysteries on these bikes that need to be figured out. 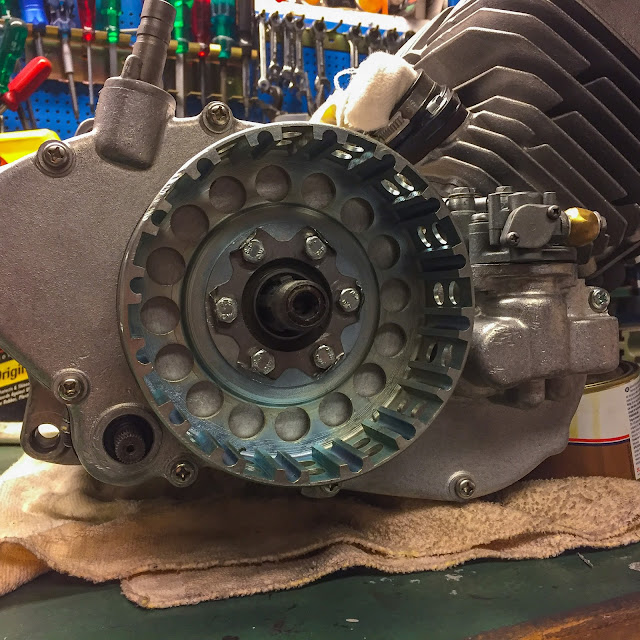 Next was the outer clutch housing. Loctite AND the repro lock washer. Double security here. 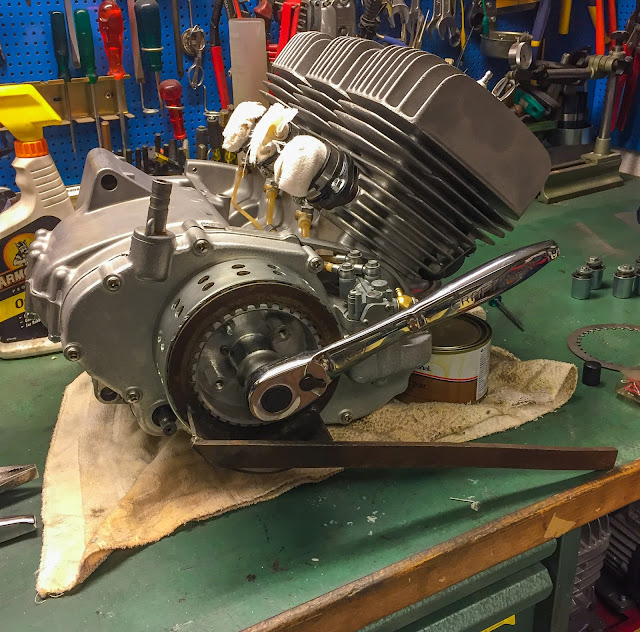 Inner clutch hub was next. This is secured to the shaft by a large 20mm nut originally secured by a lock washer only. Today I used Loctite and held the inner hub with a special tool made for the H1 and H2 street bikes. It worked fine also here, even though it couldn´t enter the hub the same way as on the street bikes. 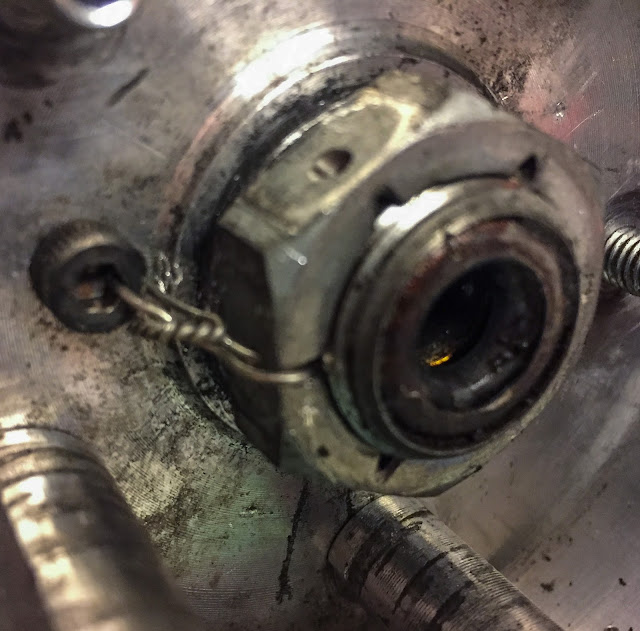 After "Esso" lost his clutch in a race in 1970 I think he made this modification to the clutch hub securing. He drilled holes in the large nut and put a 10.9 grade allen screw into the bottom of the inner hub to be able to safety wire the clutch hub to the shaft. Quite smart and ingenious, so I´m going that way also! 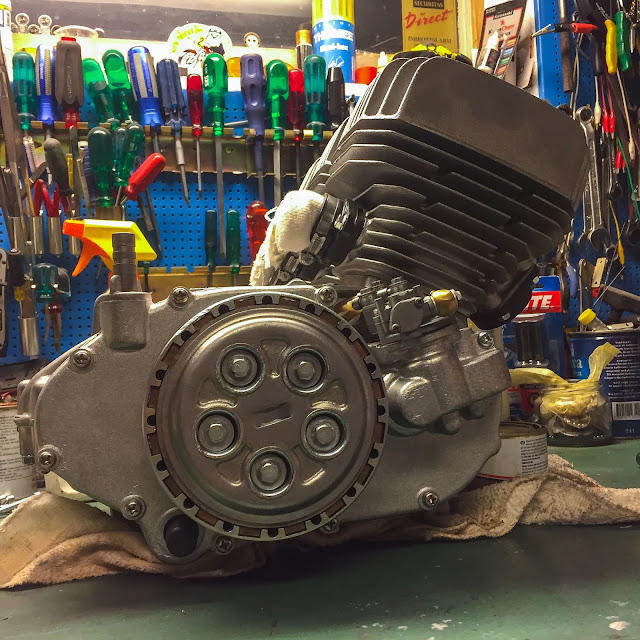 Finishing up the clutch side of the engine is just a matter of following the parts diagram. Start out with one of the two outer steel plates at the bottom and steel-fiber plates until you end it with the last outer steel plate just inside the pressure plate. All the screws are secured with Loctite. I don´t think they were secured by wire originally but they are drilled for it so maybe "Esso" actually did use wire also here. Remains to be seen... 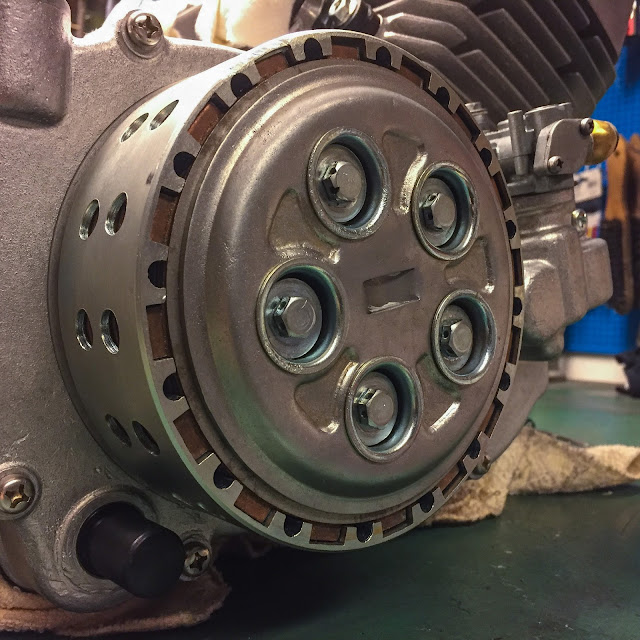 For now I´m going to leave it like this. Ebbe promised me it will not come undone when Loctite is used. Anyway, I think it looks a lot better without the wire. The problem using wire here is that the pressure plate will move outwards when you pull the clutch handle and the wiring will have to be slack enough to allow that movement. I´ll give it some thought and maybe I´ll come up with something that looks OK and works the way it should. 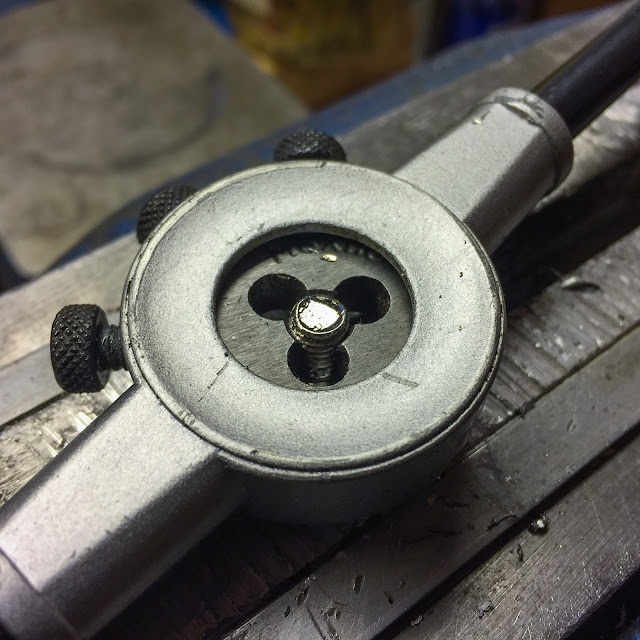 Next up were the handle bar parts. Brake-, and clutch levers, throttle assy and the choke lever. I needed to fix a screw that clamps the brake lever to the handle bar. I had a nice one, re chromed years ago just needing a thread clean. 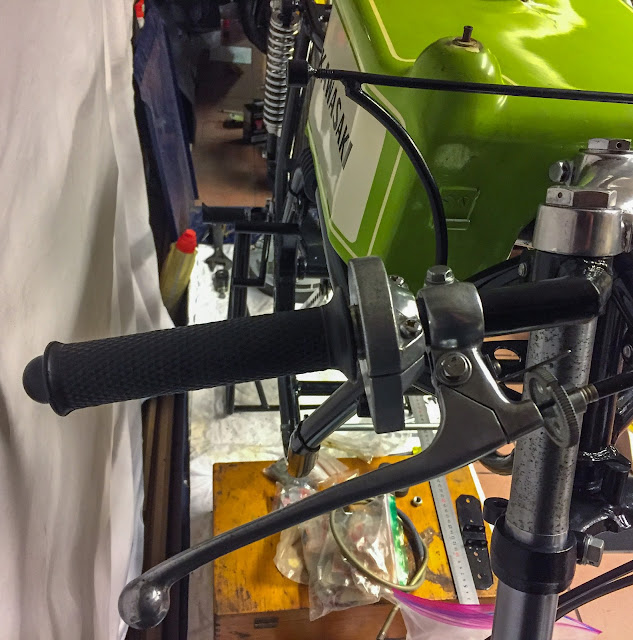 The right side more or less finished. The throttle grip and brake lever were already done, just waiting to be mounted on the bike. I think this position is correct with the rounded end part of the handle bar protruding through the open end of the throttle grip. I was also able to get the brake cable into the lever after I put the two cables in place down at the wheel. I believe this is the correct sequence. 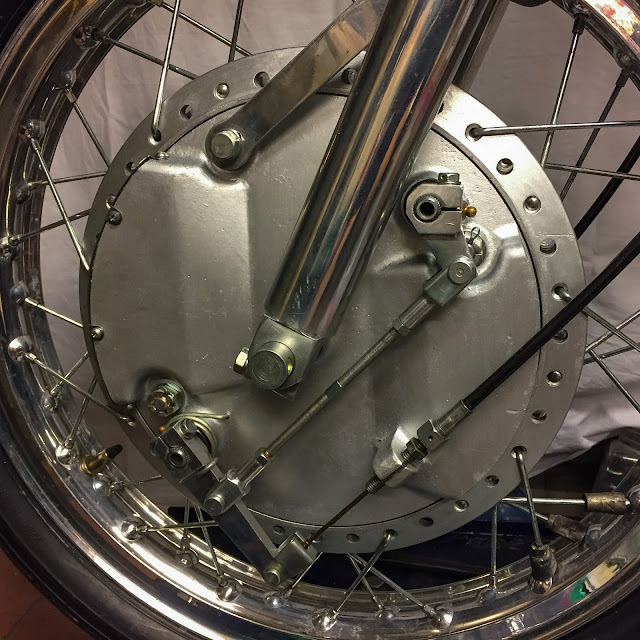 The left brake plate more or less completed! The cable need to be safe tied with a cotter pin and all the bolts and nuts safety wired. I´ll do all of that when I´m positive I have it all on correct. 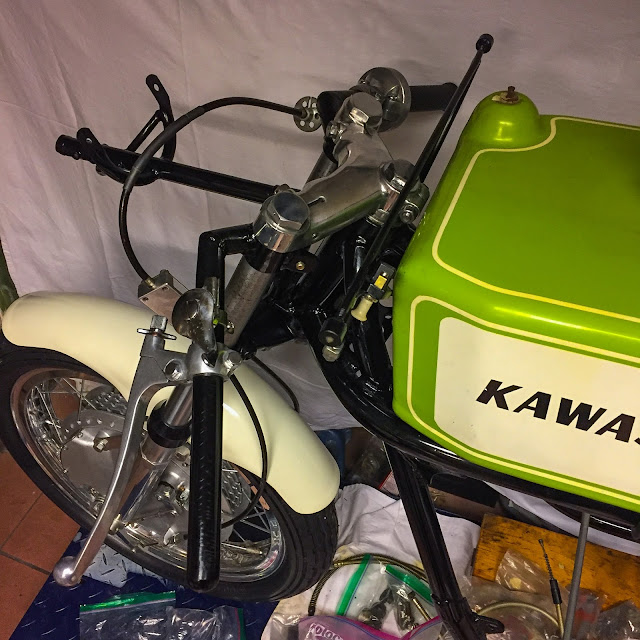 The choke lever and the clutch lever in place on the left side. I´ll wait with the rubber grip until I´m positive I have everything correct here ass well. The grip is fully refurbished and fully usable but I don´t want to take it off one more time if I don´t have to... 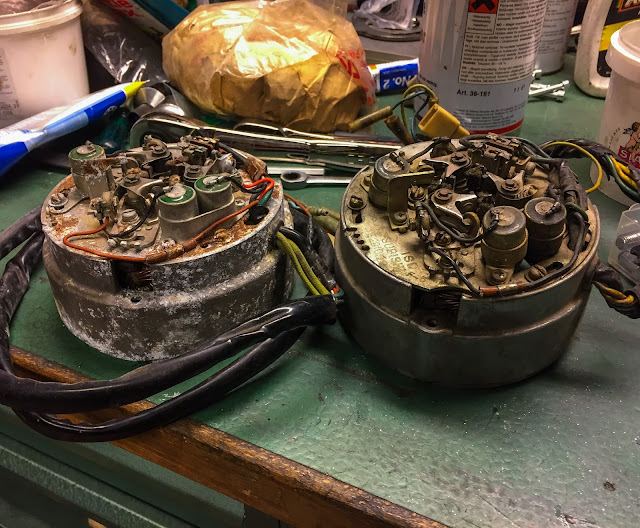 I have also started working on the stator and ignition on the bike. The original yoke on the left and one from an H1B 1972 with points ignition i Bought on eBay on the right. They DO look similar! The condensers are different and also the length of the wiring. The H1B also have a larger generator and more windings in order to supply electricity for the street equipment such as lights, horn flashers etc. I´m going to try and rebuild as much as I can using bits and pieces from the H1B to make the original stator work as good as possible. More about this part of the project later. For now I´m happy to have most of the parts in my shop. I´m still looking for the ignition cam 21103-004 and also the cam plate 21106-003. I do not know why Kawasaki have different part numbers on the ignition cams here. One reason can be they actually ARE different in angles, duration or what-not?? The timing cam plate is the same number, though... Interesting! 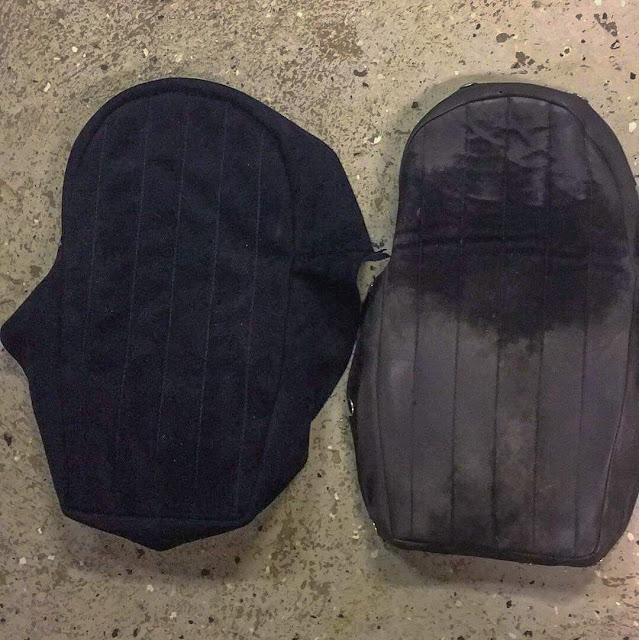 Remember my adventures with reproducing the seat cover? Well, my sewing skills din´t quite suffice here so I visited NCCR in Delsbo and left the manufacturing to Pär Svedin who works at NCCR and also is a tailor. He´s been working on the covers and have them templated for production. 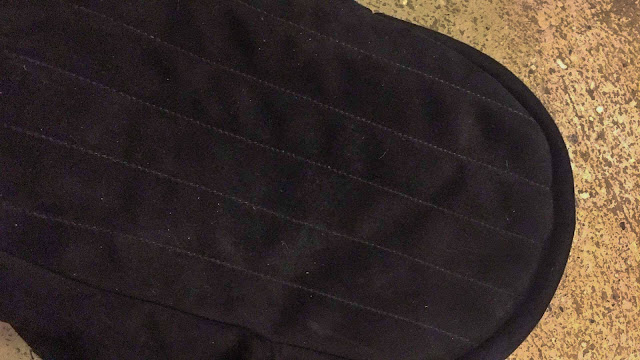 He sent me some pictures of the progress so far. The material here is real suede leather he had in stock. Looks absolutely gorgeous to me! 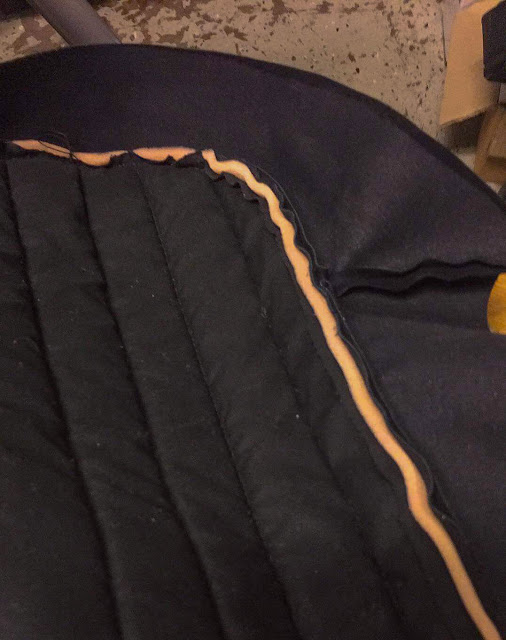 He´s using a slightly thinner liner/padding on the under side compared to what I used. Clearly an improvement. 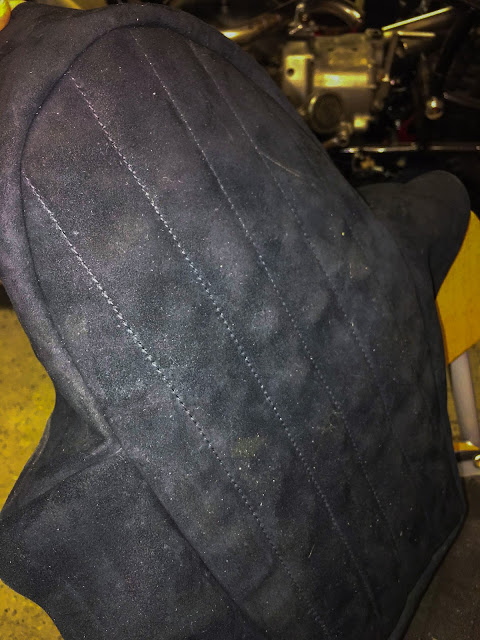 These covers will be close to perfect in my book! I hope I´ll be able to show you the finished product within a coupe of weeks. I´m going to have at least 3 covers made this time. One might be in brown, we´ll see... 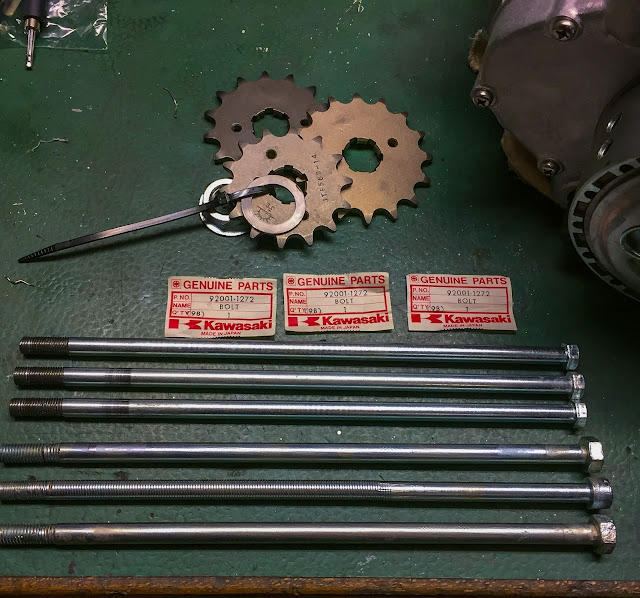 The engine bolts on the bike didn´t look too good. I tried to find new ones on eBay and through some of my sources over the world. No joy. 285mm long, quite STD, engine bolts. Very special for the H1R only and thus impossible to find. Luckily my friend, Janne, has a large stock of NOS kawasaki parts and when I had found out what part number I needed (longer ones with the same hex head and diameter...) he could find 3 of them for me! 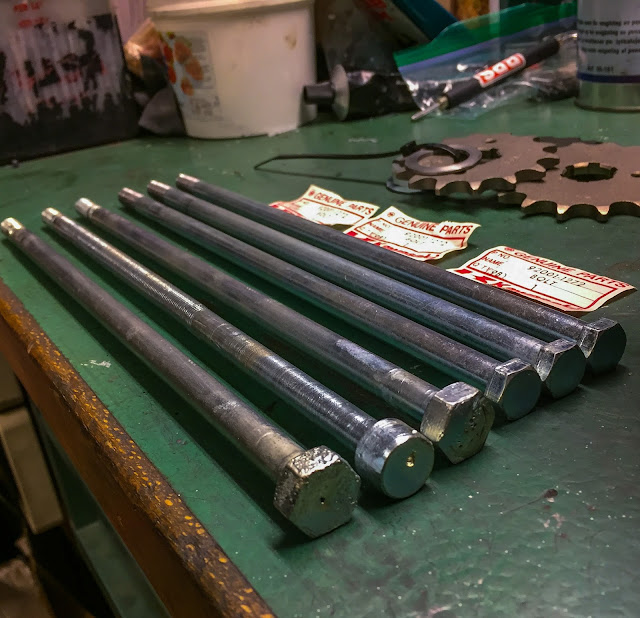 In the picture on the left you can see the difference between my "original" bolts and the new one supplied by Janne.  The three heads on the left just didn´t work out. Nor did the fact that one of them actually is nothing more than a threaded standard rod fitted with some kind of head. Not good! I need to get the heads drilled for the safety wire, though. We´ll see if I can handle that myself or if I need to get help. 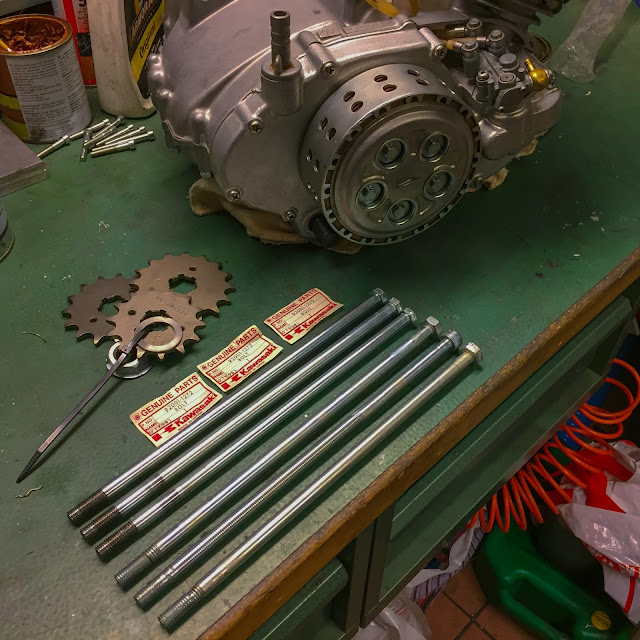 Janne´s good friend, Wicke, helped me shorten the bolts in his lathe to the required length of 285mm. Part number 92001-1272 is a perfect match when shortened by approx 15 mm and threaded some more. In this picture are also the parts supplied by Ebbe to accommodate a 520 chain and sprockets to the bike. He made the spacer and the special lock washer needed to fit these front sprockets to the engine. 14,15 and 16 teeth up front and three different sizes on the back sprocket will be quite enough for my racing purposes! The rear wheel is at ISR in Tumba here in Stockholm getting the rear sprockets machined as we speak! They will hopefully be done just after New Year and come beginning of January I´ll be able to marry the engine and frame in holy matrimony again! I could risk doing it without the rear wheel on, but it will be a lot easier to do if both wheels are in place.

Tomorrow I´m off for work again. If I´m lucky the first seat cover from Pär have arrived when I get back. Hang in there for more, boys and girls!

Happy Holidays and a very Happy New year to you all!!