The beginning of the story...

I promised a bit of history concerning the H1R last time. I´m in the process of trying to investigate as much as possible about this particular bike and H1R:s in general. I´ll keep you posted as new (old) information surfaces. It´s totally amazing to look into the life of a motorcycle like this and of course, a driver like "Esso"...

Let´s start with the obvious history that was available upon the time of purchase. The receipt when Björn Blomqvist bought the bike from Flöter (The exclusive distributor in Sweden for Kawasaki during this time). Click on the pictures for a better, readable view! 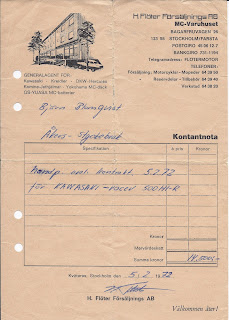 Here we can see Björn bought the racer from Flöter in February 1972 for 14500 SEK. I will try to find out more about the races Björn took part in with the bike after his purchase. It is a whole lot easier finding information about the previous owner, "Esso" Gunnarsson... I think Björn paid a good price for the bike considering the price was 16000 SEK two years earlier when "Esso" bought it brand new. 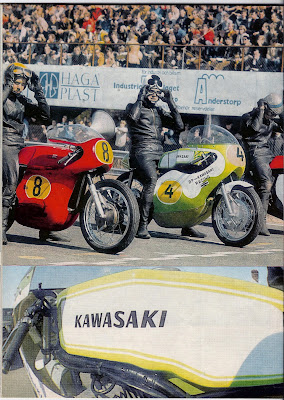 The story of the bike really starts early 1970 when it´s clear that Kawasaki will make a production racer and that Sweden actually would get a couple of them.

Here´s an article in a Swedish magazine called "MC-SPORT" from late 1970 where the racer is introduced and described. A couple of drivers had been racing 1969 and 1970 with customized MACH III standard motorcycles and actually performed quite OK. Per-Åke Dahl was one of them.

On the picture, taken in Anderstorp raceway, in May 1970, "Esso" is adjusting his goggles and preparing to race this bike... 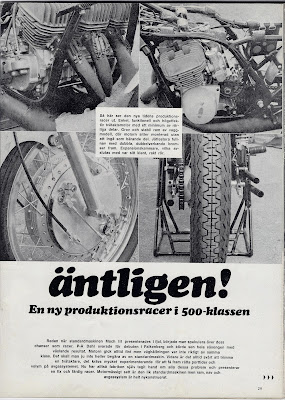 "Finally! A new production racer in 500cc" says the headline of the article. You can see the extremely beautiful front drum brake with its 4 LS technology, the cylinders with the spring-mounted expansion chambers, the rather large Mikuni VM35 carburetors and the not so large stingers at the end of the chambers. 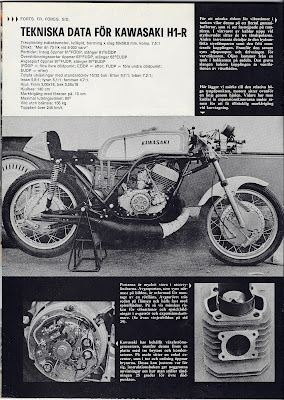 And here´s some technical data. These early bikes had normal points/battery ignition and the pictures show how the battery was fixed to the frame with rubber straps. I need the complete battery box, by the way...
The weight is 136 kgs (empty) and top speed says 245 km/h. Not bad for 1970! 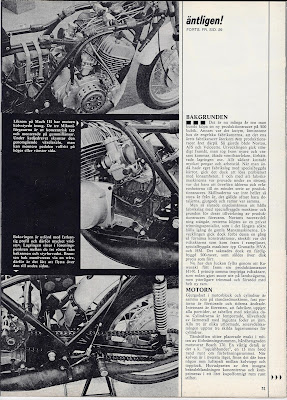 On page number3 of the presentation you can see the dry clutch, oil pump, tacho drive and the battery once again.


Further down is a picture of the three carbs and the gearchange shaft protruding through the engine making it possible to choose what side you want to put the gear lever and brake lever on.

Here the brake lever is on the left hand side with the optional, longer, brake cable going through the frame over to the right side of the bike. Kind of interesting!

The last page is posted for you Swedish guys wanting to read the full article....

Here´s another very interesting article from "Allt om MC" in May 1970. This piece shows Hartmut Flöter with the two bikes he imported to Sweden. He wanted to buy more, but Kawasaki wouldn´t let him get more than two. This is actually confirmed by Hartmut Flöter this week over the phone. At 80 years of age he is still playing golf and has a crystal clear memory of these bikes! 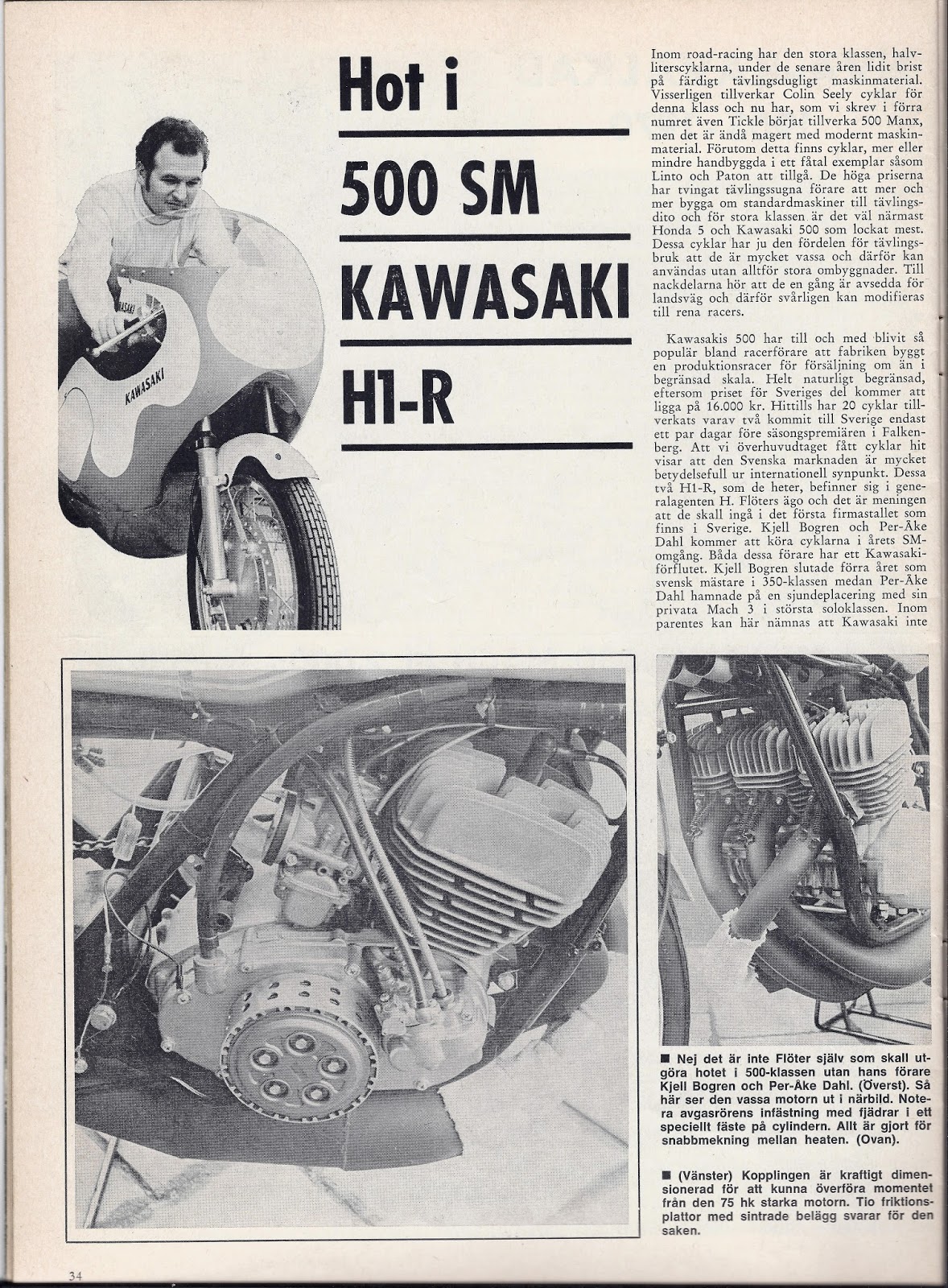 The real cool thing with these pictures is that the bike without the fairing is my bike! The other one was sold to Per-Åke Dahl (with some kind of sponsorship deal with Flöter and his business).

My bike was supposed to be raced by  a driver called Kjell Bogren in team Flöter, but was eventually bought by "Esso" Gunnarsson instead. I´ll get back to his story later on. 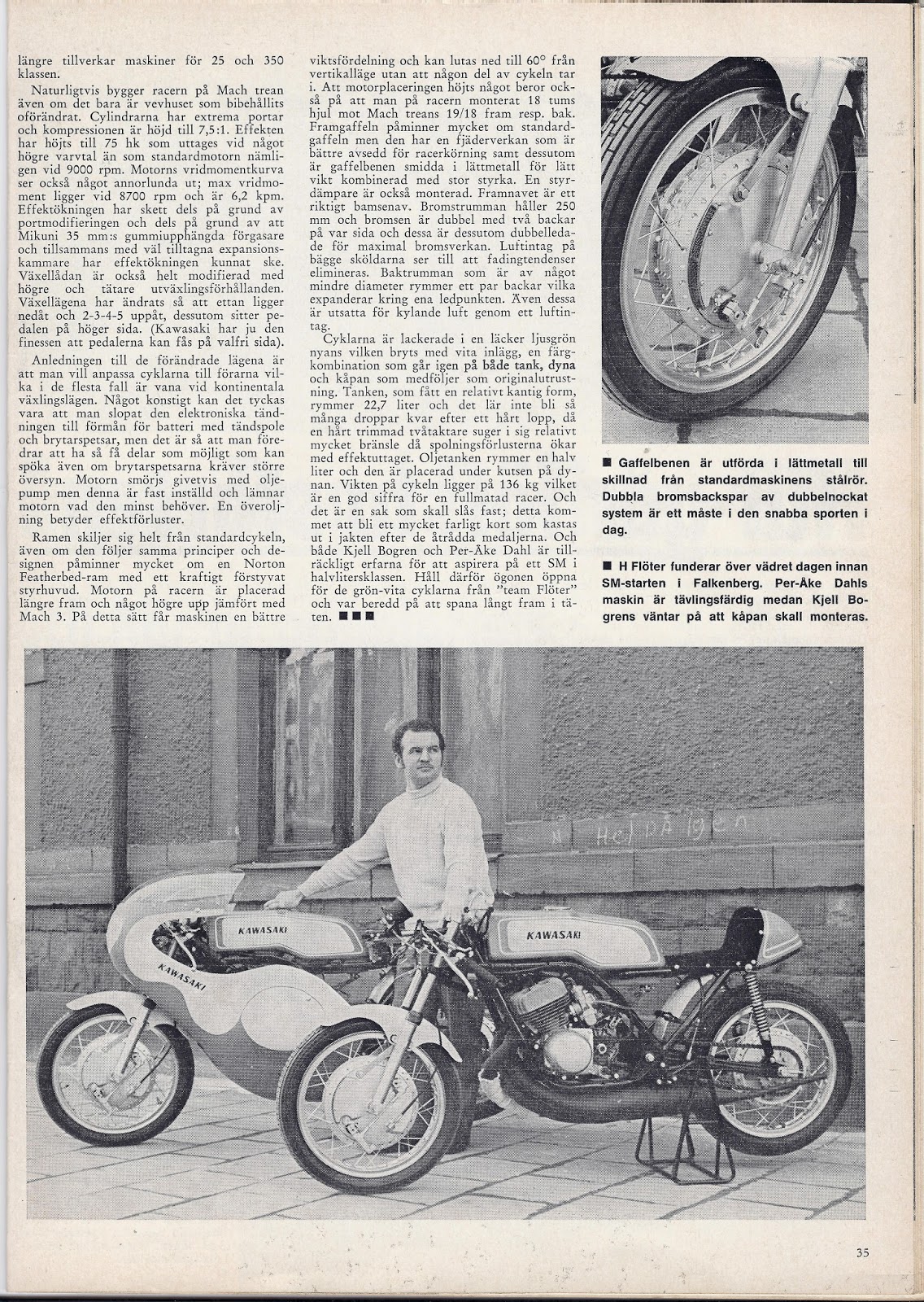 The picture above was taken the day before the start of the Swedish SM-series in Falkenberg 1970.
Dahls bike was race-ready and Bogrens needed the fairing mounted. I wonder if "Esso" bought the bike later this day or if it was raced in falkenberg at all? I´ll need to figure that one out!

Well, that´s it for now. I´ll continue searching for more interesting stuff to post here regarding the history of the bike and also about "Esso" and his racing history with the "Green meanie"

Please be patient as the scanning takes time and effort to get right.

Any information you guys might have concerning the bike would be much appreciated. Any parts you might have or contacts in that respect would also mean a lot to me. I need a lot of stuff, obviously....