Starting out with engine work.

Last week I had a plan to visit Ebbe Parnestål, Eptune, former EBOS owner in Malmoe with my engine. Unfortunately he has his prime time in the workshop this time of year so that didn´t happen. Well, I´m in no hurry....

But the thought of leaving the engine there and getting the rebuild started inspired me to have a look at it myself. Taking it out of the frame was straight-forward and wasn´t a big problem. Just a few minutes later it sat on the bench in all its glory....

It sort of needed a bit of cleaning before opening. Most of the dirt was just hay and grime from the barn, nothing serious like grease or oil mixed with dirt etc.

I decided to start cleaning it using compressed air and simply "blow" the dirt off. But first a glimpse into the exhaust ports to have a look at the potential catastrophy....

OK, the right hand cylinder.... Hmm, doesn´t that look strange? No burned surface on the piston at all...?? Can it be?

And finally the left one. Piston being close to TDC, I cannot see the top of it, but the surface looks good, very good. Now, get on with the cleaning!

As you can see, no broken fins or other damage to the heads. Good news! Rags in all the ports, spark plugs in the heads and out the garage door it went!

A good "blow job" cleaned the engine enough to check for the most critical thing when dismantling a triple engine... Are the cylinders stuck on the studs?
If they are, you´re in for a major problem! I´ve had to trash an H2-cylinder a while back because it was so seriously stuck on the studs. Rust makes the studs swell and they pinch the cylinders firmly in place. Yes, you can try penetrating oil, diesel and what not, and still they are stuck!

I´m using a penetreating oil (5-56 or WD40) on the head bolts and carufully open them. Actually came out freely. No big deal at all! Once the bolts are gone you can feel for movement of the cylinders on the studs....

Heureka!! All three of them does move, none were stuck. Holy J**ZUS, that felt GOOD!

Well, back to the pistons. I didn´t remove the cylinders from the cases, just had a peek down the barrels to check the pistons. This is the right hand one. Brand NEW! Never run after being installed in the engine. This is so good news! If I´m lucky the last thing Björn did was rebuilding the crank and pistons before storing the bike... Piston is first OD, +0,5mm. Note also the different shape of the head gasket on the race engines. Circular and comes in different thicknesses to be used during different conditions. News to me....

The other two pistons are used, but doesn´t look to be in bad shape at all. Cylinders are smooth with traces of honing still visible. I hope we´ll find the barrels and pistons fully usable when Ebbe finally gets his hands on the engine. Let´s hope the same goes for the crank...! I´m optimistic since there is a spare crank with the bike and that one has a shot conrod. let´s hope the one in the engine is good!

So, for now, the bike rests on the lift without it´s heart, the engine.... I´ll get back to the motor when either Ebbe has time for it, or I can´t wait any longer, and start taking it apart myself.

Yesterday I also learned that there were actually four of these bikes imported to Sweden!

A couple of weeks ago I talked to a former employee of Flöter´s and he couldn´t remember if there were two or more imported. I later talked to Hartmut Flöter himself and he was sure only two were sold here in Sweden. I´ve been a bit suspicious about this since my bike was sold again by Flöter in February 1972 to Björn (who´s widow I bought it from....) and "Esso" continued racing on a Kawasaki. I figured he must have bought another H1R somewhere else and brought back to Sweden.... That´s NOT the case.

The former emloyee called me yesterday and told me he hadn´t been able to let go of the thought of these racers! He had actually been working with Flöter all the time to 1985 (with an 11 year interruption for other work during 1974-85), when Flöter sold the business to Monark motor. He stayed on... And also stayed on when Kawasaki took control of it´s own brand in Sweden during the early nineties. He retired 10 years ago and is now 75 years of age. Anyway, he made a visit to his old colleagues at kawasaki and found the records from Flöter´s time also!

There were two H1R:s sold 1970. These are presented in my earlier post. One was driven by Per-åke Dahl and the other by "Esso". These records also confirm that the engine I have is the correct one for my frame! Engine number KAE90069 and Frame KAF90070.

1972 they sold two more! These were (with 99% security, H1R-A:s). The records says one was bought by "Esso" and the other one by another famous driver, Sture Wass.

This makes very big sense when you look at all the pictures out there on the internet. It is obvious that "Esso" used at least two H1R:s during his career, most probably even three....

The main differences between H1R and H1R-A are the design of the exhaust system and the ignition system... The H1R has a conventional breaker-point ignition system and the H1R-A has a digital system similar to the system on the street bikes, MACH III. The H1R has a "cross-over" design of the pipes and the H1R-A doesn´t... This makes the belly pan look very different on the two models. The H1R-A has a "lower" design of the belly pan and that can be clearly visible on some pictures. 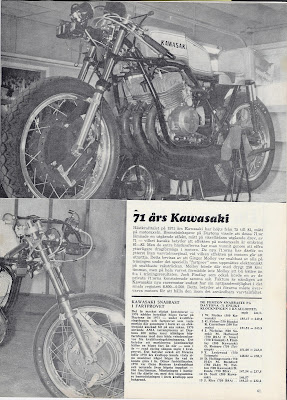 Here you can see the straight design of the exhaust sytem on the H1R-A and also the three CDI-boxes up front. Please note they are NOT the same on my bike. My bike was fitted with a Kröber system by "Esso", hence the homebuilt bracket on mine.


I´ll get back with more material concerning the race history with the respective bikes as I get it organized.

So far, I´m a very happy man regarding the condition of the bike. I know I´ll have to fix a lot of stuff, but the cylinders moving off the studs was a big concern...