Now it is time to start telling the story about S-O Gunnarsson, or "Esso" as he became known to the world. Even though we lived on the same small island outside Stockholm for 10 years (I moved here 1993 and "Esso" sadly passed away in 2003...) we never met in person. Back then I was starting up my vintage motorcycle hobby restoring my first bike and "Esso" was living a quiet life with his wife, Irene. After his racing career ended due to an accident in 1974 he took great interest in photography and took lots of wonderful pictures during that time.

As you can understand I didn´t know him personally, but I feel like I´m getting to know him more and more after reading articles about him and his racing diary that Irene so kindly have let me read.

He was obviously a very thourough guy in his racing. Documenting all races with data concerning the weather, courses, bikes and himself. He was also a very good mechanic! Lots of work during the races were performed on track in the pit lane. He mentions changing pistons, honing cylinders, replacing crankshafts etc, etc. At least in the early days this was done by himself...

There was a great article in a Swedish magazine in 1974 covering some of his racing career. I scanned it and I thought I´d just let you read it: 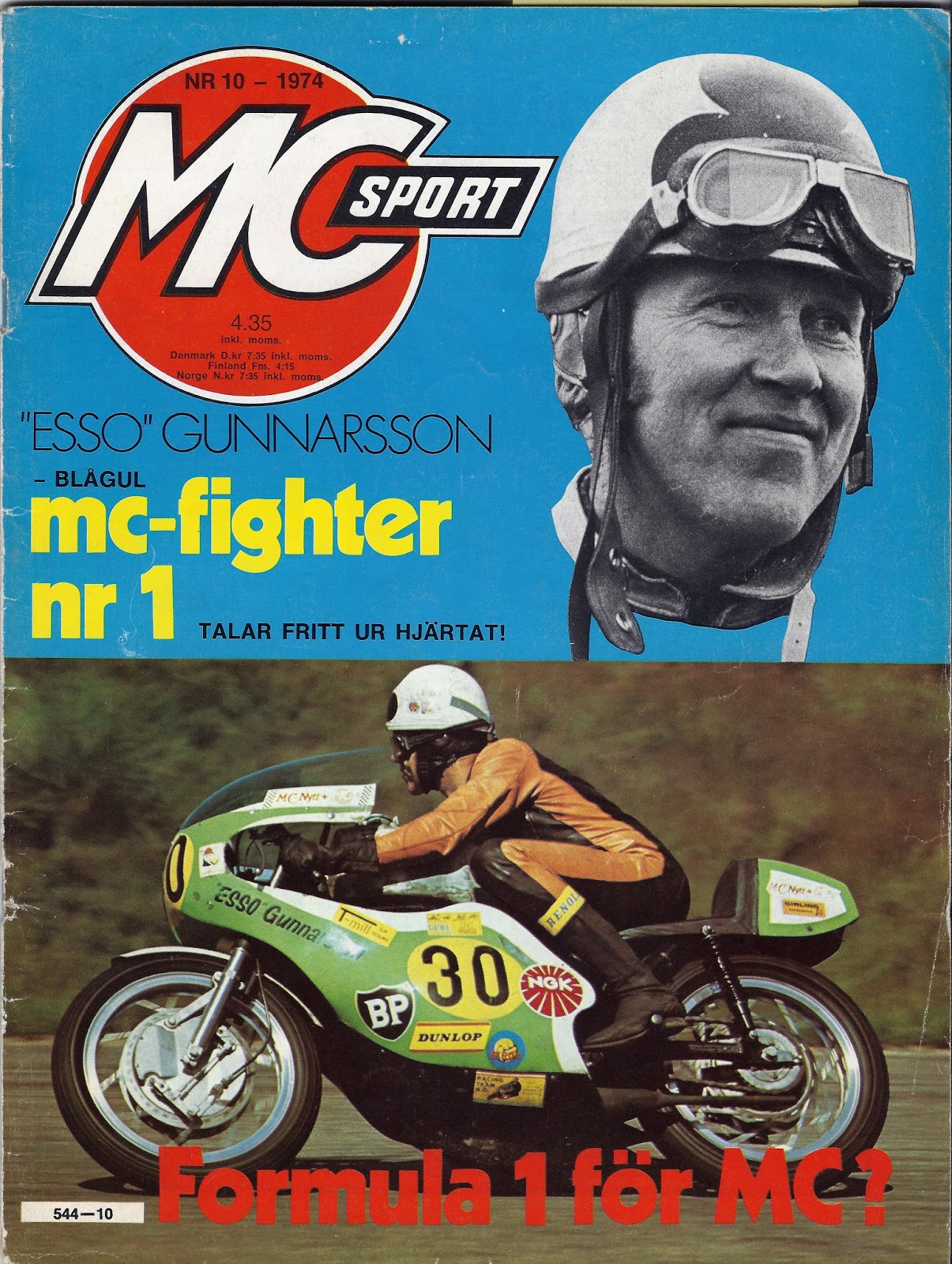 On the cover is a picture with his Three-clover helmet and the headline: "Esso" Gunnarsson, blue and yellow MC-fighter number 1, Speaks from the heart!

He sure did have some issues with the Swedish racing organization, SVEMO, regarding helmet rules...

We can also see that the bike in the picture is his newer H1R-A. Look at the lower profile of the bottom fairing indicating the straight exhaust system. 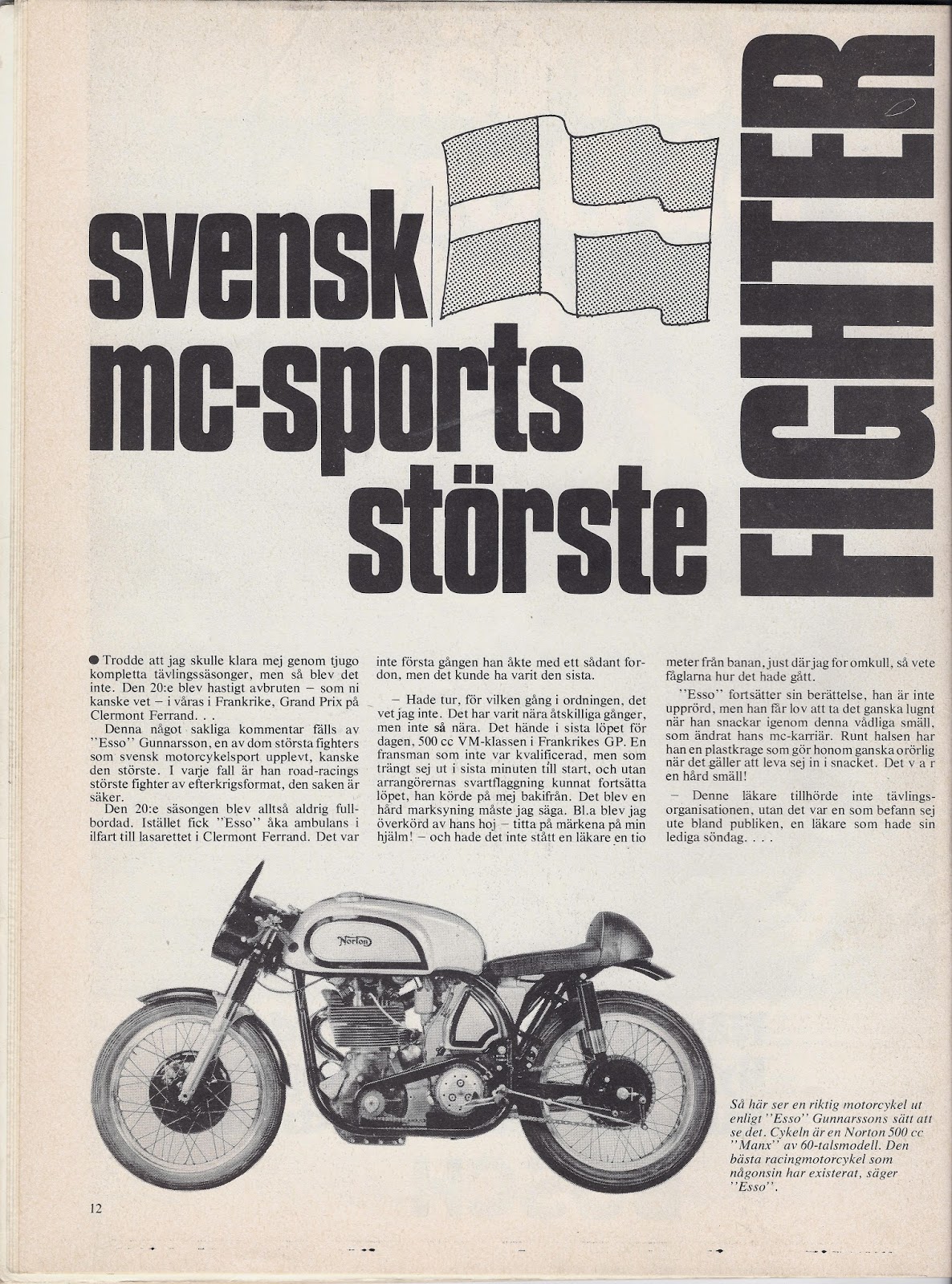 On the first page of the article "Esso" describes his accident during the French grand Prix on Clermont Ferrand, 1974.

He was saved by a doctor (out on his free day) standing by the side of the track. This doctor stopped the officials from touching him after the crash and led the rescue and ambulance transport to hospital.

The picture shows "Essos" favorite racer of all times, the Norton Manx... He raced one of those as well. Partly in parallell with the H1R:s! 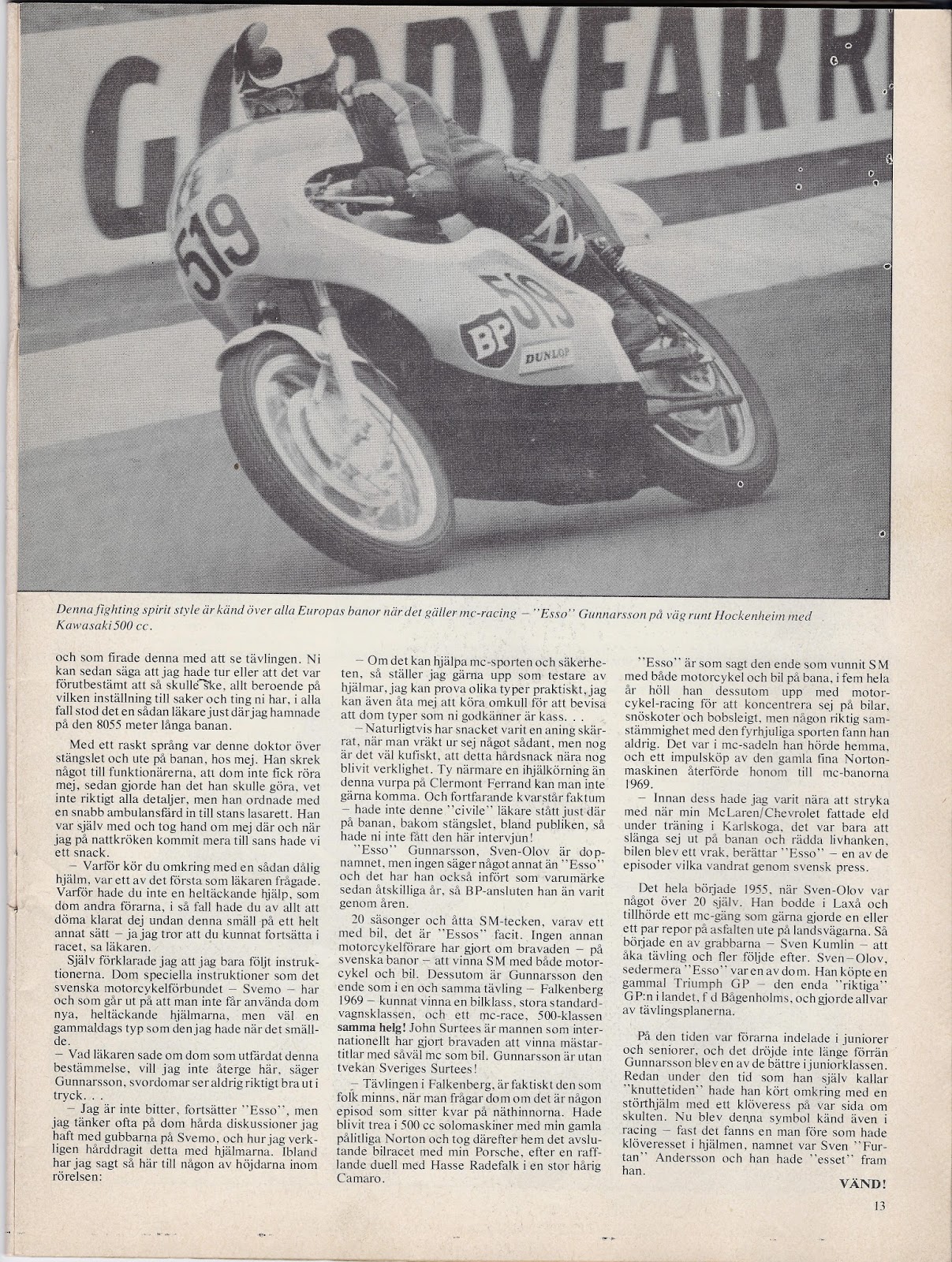 The story continues...
At the hospital, when "Esso" regained consciousness, the doctor asked why he was racing with such an outdated,old, helmet? "Esso" explained the Swedish rules concerning the use of the newer, much safer, covering, helmets the other drivers were using. They weren´t allowed in Sweden!
His opinion couldn´t be printed due to foul language..... He had tried to argue for the use of modern helmets, even offering SVEMO to crash on purpose to show how useless the old type of "pot" helmets were compared to the new ones.

"Esso" is also the only Swedish man who won both a motorcycle and car championship the same year! This happened 1969 in Falkenberg when he first came in third during the Motorcycle race on his beloved Norton, and then won the car race in his Porsche. Quite an accomplishment!

Next the article tells the story of how he started racing bikes in 1955. He aimed to reach 20 full seasons racing, but that didn´t happen due to the accident...

He won 8 SM-titles (Swedish championships), One of those in a car.... During the 20 years he raced. That makes him one of the greatest if not, THE greatest Swedish racer of all times! 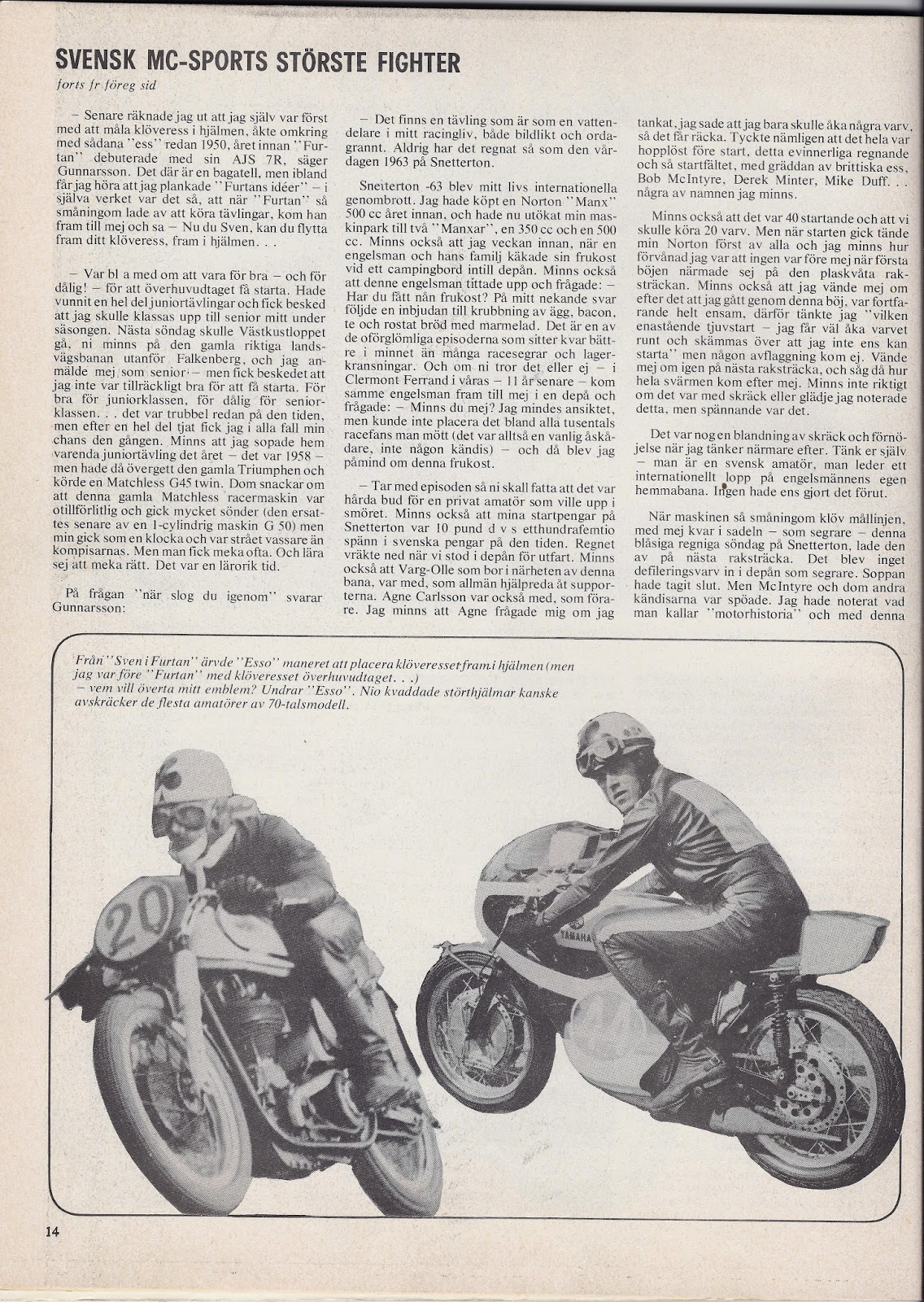 Next is the story about the "Three-clover-helmet".

"Esso" started out with the Clover "Ace" symbol on the sides of his helmet. Another driver, Sven "Furtan" Andersson also used the clover ace symbol but up front on his helmet. There was some debating who was first with that symbol. "Esso" claimed to be first! He had used it before racing during his biker years up to 1950, the year before "Furtan" put his Clover Ace on his helmet when racing his AJS 7R. When "Furtan" stopped racing a few years later he told "Esso":
- "Now, Sven, you can move your ace up front, to the front of your helmet"
And there it stayed.... Becoming a very well known symbol for S-O.

The story about his international breakthrough is next.

Snetterton 1963, Rain pouring down and "Esso" was there thinking he wouldn´t even finish the race due to the conditions being so lousy. His Norton was the first bike to start and all of a sudden he was in the lead and managed to keep it to the end. The bike stopped after the finish line due to fuel starvation (he hadn´t even filled the tank up before the race because he
couldn´t imagine the race being run to the end at all...) A Swedish amateur had beaten all the British stars in their own back yard! And that opened all the doors to continuing racing all over Europe. 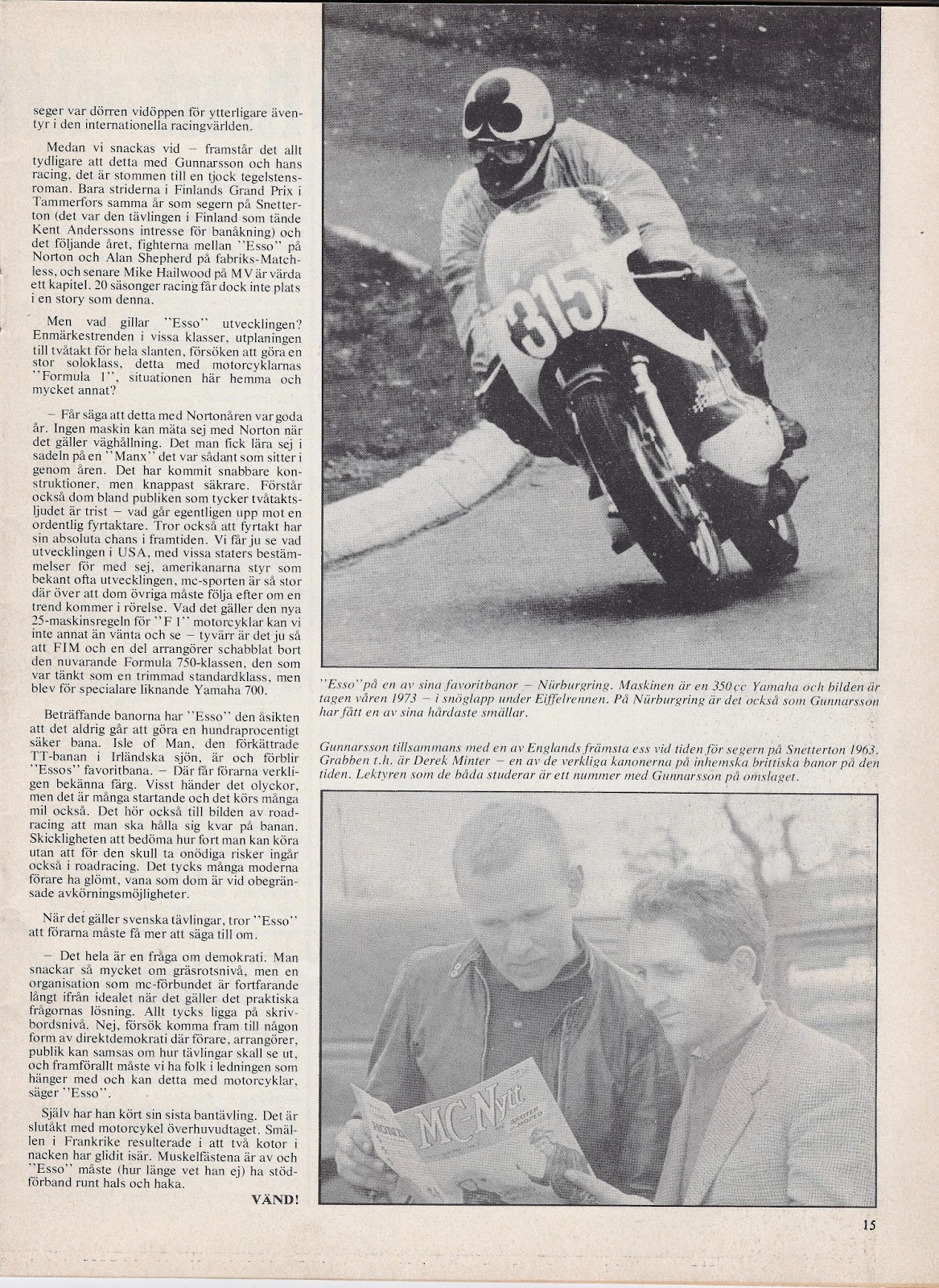 On the next page is talk about his opinion on the "One-brand-development"  in racing and also the thoughts of a "formula 1"for motorcycles. He explains how much he loved his old Norton Manx and what a wonderful bike it was racing. Great handling and a very safe bike. He also dind´t like the sound of the twostrokes!! who would have thought that since he actually won a great number of races on his twostrokes...
His favourite course was "The Isle of Man TT". A great racetrack that really requires the drivers to concentrate to the fullest. One of the parts in roadracing is using sound judgement and controlling your speed and braking in every instance in order to actually stay on the track. Modern racetracks with large safety areas around the course makes it too easy for the drivers to take too large risks. IOM is very punishing in that respect.... 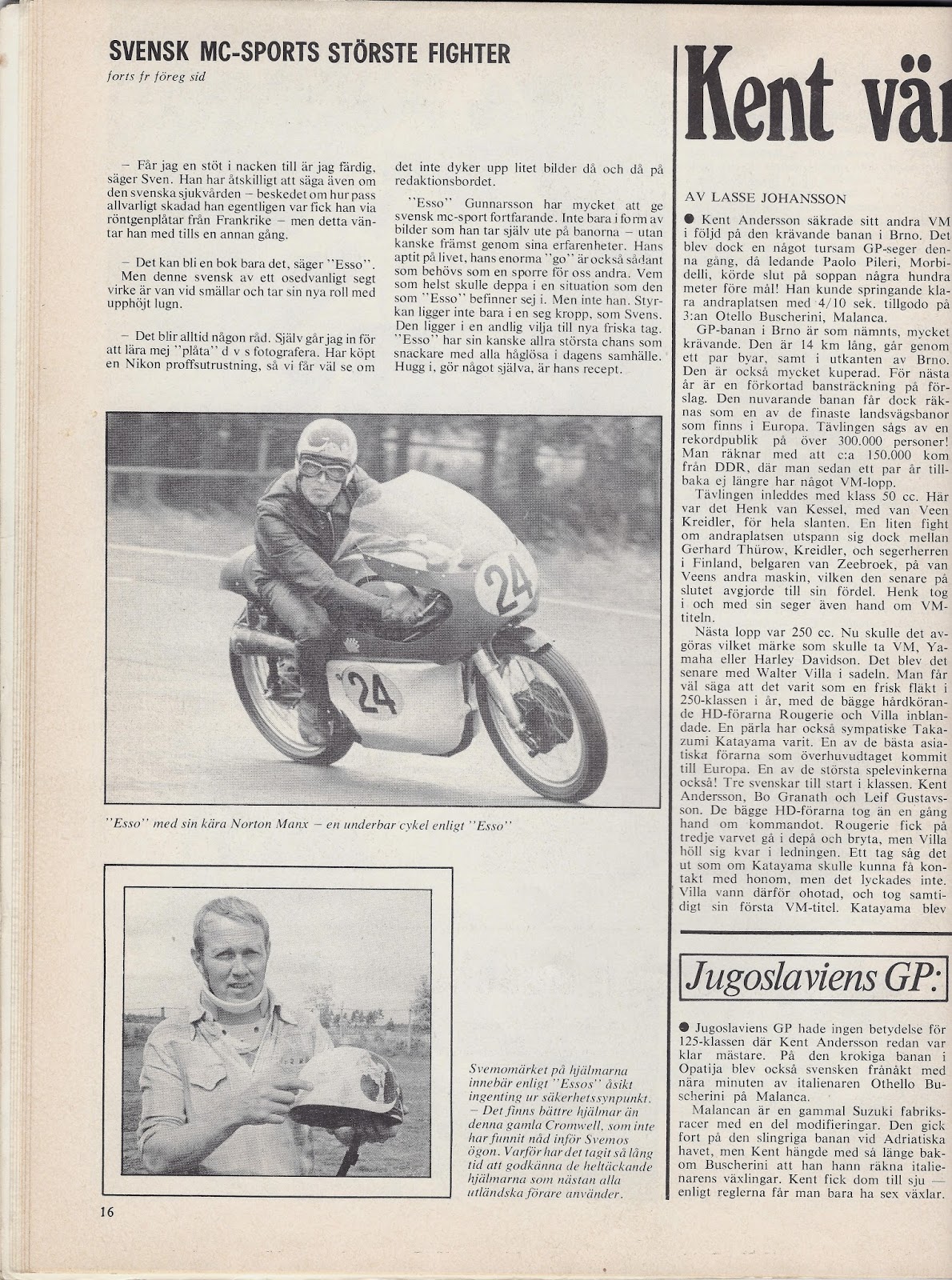 The last page tells about his future plans to become a photographer. He bougth a nice Nikon camera and set out to document Swedish racing and also IOM TT etc. His own racing ended there, in 1974, with two vertebrae broken in his neck....

The bike in the picture is is beloved Norton manx. "The best racer in the world" according to Sven.

He holds one of the 9 helmets he crashed during his career in the last picture. You can also see the support collar he had to wear for some time.

The last line in the article summarizes his  spirit:
"Just do it!" is his prescription for the general gloom in todays society.

Modern words from long ago.....

This article seemed a good starting point and as a general description of  the man behind the stories and all the victories he actually won during his racing years. My next post will tell more about his racing, his diary and his bikes.

Bare with me, soon I´ll start working on the bike!